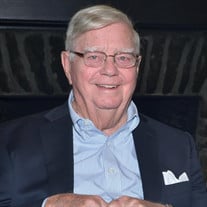 John Hibbard “Hib” Robertson, 93, of Lancaster, PA passed away on Tuesday, November 23, 2021. Born in Deland, FL, he was the son of the late John Taylor Robertson and Fern Hibbard Robertson. He grew up on the beach and enjoyed working as a lifeguard before graduating from Carlisle Military School. He earned a Bachelor’s degree from Rensselaer Polytechnic Institute, where he was a member of Theta Chi fraternity and an MBA from Temple University. Hib honorably served his country in the United States Marine Corps during the Korean War. He survived the second landing of Inchon, the Battle of Bunker Hill, and the defense of Hill 181. Hib served 14 months in Korea in the Third Battalion, Seventh Marines, George Company. He was an infantry officer in the First Marines Division. Hib later became a platoon leader and then a company commander with the rank of Captain; he was promoted to Assistant Operations Officer for the battalion. He received two letters of commendation and received the Rifle Sharpshooter award as a platoon leader. Hib was a longtime resident of Lancaster. Hib worked as a general production manager in the packaging division of Armstrong World Industries and Kerr Glass Company. Later, he became Vice President of Production at Kerr Glass company. After his career with Armstrong and Kerr, he became Chief Operations Officer with Woodstream Corporation in Lititz. Hib gave back to the community in many ways. He was a board member of the Woodstream Corporation, Heritage Savings and Loan, the Lancaster Chamber of Commerce and Industry, American Fish and Tackle Manufacturing Association, the Fulton Opera House. He was Board Chairman of the Linden Hall School for Girls. Hib was a 50-year member of the Lancaster County Club and a proud member of the “Court Jesters” tennis group. With the jester friends, he had some of his favorite times on and off the court, including parties and travel to Florida and Idaho. The Jesters were among his truest friends. A lifelong Episcopalian, Hib was a life member of St. James Vestry. Hib was also a member of Lancaster Rotary. Hib was an enthusiastic fan of North Carolina Tar Heels basketball and Dallas Cowboys football. Though his travels took him around the world, he loved our nation’s natural beauty, especially Yellowstone National Park. And, his favorite dessert was vanilla ice cream. If you knew Hib, you know how devoted he was to his family. Even though the family was spread out across the country, Hib spent the time to stay in touch with everyone as well as making sure that they stayed in touch with each other. Hib is survived by his wife of 29 years, Robin B. Robertson; his children Margaret Bousquette (Kevin) of Stuart, FL, Dr. John H. Robertson, Jr. (Virginia) of Bull Head City, AZ, Sarah Robertson (Tom) of Charlotte, NC, and Christian Herr (Amy) of Vienna, VA; his eight grandchildren Marie-Claire, Jenna, Brad (Alex), Kayla, Cristiana, Sophia, Zachary, and Oliver; and his two great grandchildren Jasmine and Emma. He was preceded in death by his first wife, Joanne Bradford Robertson. A requiem mass will be held at St. James Episcopal Church on Friday, December 10, 2021 at 11:00 a.m. Friends are welcome to greet the family in the chapel at 10:00 a.m. until the time of the service. Interment will be private at Forest Hills Memorial Park, Mt. Penn, Reading, PA. In lieu of flowers, please make donations to the American Cancer Society at www.cancer.org to donate online or by mail 314 Good Drive, Lancaster, PA 17603.

John Hibbard &#8220;Hib&#8221; Robertson, 93, of Lancaster, PA passed away on Tuesday, November 23, 2021. Born in Deland, FL, he was the son of the late John Taylor Robertson and Fern Hibbard Robertson. He grew up on the beach and enjoyed working... View Obituary & Service Information

The family of John Hibbard Robertson created this Life Tributes page to make it easy to share your memories.

Send flowers to the Robertson family.