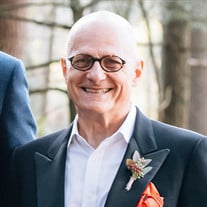 Jon Charles Lyons, 78, of Lancaster died unexpectedly on October 12, 2021 at home. His death was a shock to all given his active, vibrant, and full life. He will be sorely missed by so many. Jon had never retired and at the time of his death was working full time as an Administrative Law Judge in Philadelphia, a position he held for the past 10 years. Jon practiced law in Lancaster from the late 1970s until his appointment as an Administrative Law Judge. He came to Lancaster from Williamsport, PA where he had been Director of Legal Services, which provided representation for the poor. Believing strongly in justice for all regardless of the ability to pay for legal counsel, Jon embraced this work with dedication. Shortly after arriving in Lancaster, Jon got involved in local politics, displaying a passion for good government that was responsive to the public. He enthusiastically campaigned for Lancaster City Council, and along with Janice Stork and Ron Ford, delivered a Democratic sweep in the fall of 1982. He later ran unsuccessfully for mayor and for representative of the 96th Legislative District, but never lost his keen interest in politics. Jon relished sporting activities and especially embraced challenges. While he played a lot of golf and handball in earlier decades, he took up more demanding activities later in his life. Jon was an avid athlete beyond his years. He was an active, nationally recognized Level 3 ski instructor. This is the highest level of accreditation offered by the Professional Ski Instructors of America. Being in his 70s when he attained the Level 3, Jon was the oldest person to ever achieve this level of certification. For the last ten years, during ski season, Jon went every weekend to Elk Mountain where he taught skiing. He also was a ski instructor at Vail and Winter Park. Jon sought out skiing adventures that would challenge and thrill, leading him to Chamonix in France and helicopter skiing in Canada. About ten years ago, Jon took up race car driving. He was a certified high-performance driving instructor with the National Capital Chapter of the BMW Car Club of America. Just in the past year, he had driven at the Virginia International Raceway, Watkins Glen, and Summit Point. In August he attended the Lotus Driving School in England. Jon was an enthusiastic road cyclist for more than 20 years and was still riding with the Lancaster Bike Club and other local groups throughout Lancaster County. He cycled 8,000—10,000 miles per year, participating in a number of charity rides. Among others, he rode the Gran Fondo in New York and in Philadelphia, the Covered Bridge, and the Civil War Century, which was one of his favorites because it had so many hills. For the last three years, Jon rode every weekend with a small group. They would cycle 100 miles on Saturdays and 50 miles on Sundays. Jon graduated from Millville High School in 1961, and found his way on his own to The Citadel in Charleston, South Carolina. He was particularly proud of his Citadel degree and always wore his Citadel class ring, which was on his finger when died. After graduation, he entered Dickinson School of Law, but his studies were interrupted by a tour of duty in Vietnam where he served at the rank of lieutenant and assisted with helicopter rescue missions transporting wounded soldiers. After Vietnam, he completed his J.D. degree at Dickinson and later also served in the Pennsylvania National Guard. Jon was the son of the late Dr. Charles and Edith (Watts) Lyons. He was preceded in death by his sister Carol Aurand. Jon is survived by two sons, Justin Lyons and Mervyn Ian Arnold-Lyons, both of Lancaster, his daughter Meryl and her husband Tim Miller of Brooklyn, and a sister, Yvonne Ryder, of McKinney, Texas. A Graveside Service will be held at Donegal Presbyterian Church, 1891 Donegal Springs Rd., Mount Joy, PA on Tuesday, October 26, 2021, at 2:00 pm, followed by a Celebration of Life at the American Bar & Grill, 1081 North Plum Street, Lancaster from 4:00 pm-8:00 pm. Memorial contributions in memory of Jon can be made to Advoz Mediation and Restorative Practices, 8 N. Queen St. #210, Lancaster, PA 17603 or to Immigration Legal Services Program Lancaster Office, CWS, 308 E King St., Lancaster, PA 17602. —Lovingly written by Marlene Arnold.

Jon Charles Lyons, 78, of Lancaster died unexpectedly on October 12, 2021 at home. His death was a shock to all given his active, vibrant, and full life. He will be sorely missed by so many. Jon had never retired and at the time of his death... View Obituary & Service Information

The family of Jon Charles Lyons created this Life Tributes page to make it easy to share your memories.

Send flowers to the Lyons family.