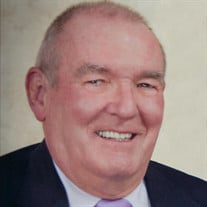 Joseph F. McDonald,83, of Willow Valley Communities, Willow Street, PA passed away on Monday, September,13 2021. He is survived by his wife, Sarah “Suzie” (Darlington) McDonald of 62 years. He was the son of the late James W. McDonald, Sr., and Helen Rose Daly McDonald. He is also, survived by a son, Thomas R. and his wife, Maureen of Austin, PA, daughter, Beth M. Cesarone, wife of Louis of Lancaster, PA and a second son, Timothy J. and his partner, Roy Orecchio of Los Angeles, California. He was preceded in death by his brothers, James W., Thomas M. and Edward F. and a sister, Helen P. McDonald Francesco. He leaves his grandchildren, Natalie Yanochko (Joe) of Orangeville, PA, Thomas and Elizabeth Cesarone of Lancaster, Kelsey Verdekal of the United States Army and Nicole Russell. He is also, survived by many nieces and nephews. Mr. McDonald was a proud graduate of the Milton Hershey School in Hershey, PA and earned an Associate of Arts Degree from Hershey Junior College prior to earning his BA and MA Degrees from the College of New Jersey (formerly Trenton State College). He did post graduate work at Rutgers, the State University of New Brunswick, NJ earning his Principal’s and Superintendent’s certification. During his 42 years of professional work, he served as a teacher, principal, and assistant superintendent of schools in the Ewing Township and North Hanover Township Public Schools in New Jersey. In addition, he served as a Demonstration Teacher for the Trenton State College at the Antheil Elementary School in Ewing Township, NJ. He, also, became an Adjunct Faculty member for Trenton State College and taught Elementary Education courses to prospective teachers. Upon his retirement from public school work, in 1993, he was honored with an Annual Scholarship awarded in his name, to a student living in North Hanover Township graduating from Northern Burlington Regional High School. Following his public-school retirement, Mr. McDonald and his wife traveled overseas, and he served as the high school principal at the International School of Athens, Greece, Hillington, England and the prestigious Nido De Aguilias International School in Santiago, Chile. During his time in Chile, he was honored with being selected to serve on the Southern Association of Colleges and School’s (SACS). Joe served on the Board of Directors of the National Association of Federally Impacted Schools and was elected Vice President of the Northeast Regional area of the program. He had been a member of the Burlington County Association of School Administrators, the New Jersey School Administrators Association, the New Jersey Schoolmasters and the Southern Association of Colleges and Schools. He was a Lifetime member of the Milton Hershey School Alumni Association and, at one point, served as the Association’s President. He was honored by the Association with its Outstanding Service Award in 2014. Joe had the privilege and honor of serving on the Board of Directors of the Willow Valley Communities where he served as Assistant Secretary. He served on the Ann B. Barshinger Cancer Institute Development Committee. He had been a member of the Board of Directors of the Children Deserve a Chance Foundation in Lancaster and at one point he served as its Chairperson. He had been a member of the Amtrak Customer Advisory Committee. Joe and his wife, Suzie, provided an annual scholarship to teachers at the Milton Hershey School as a way of thanking the school and staff for all they did for him in his ten years as a student in this great institution. Family and friends are invited to a Mass of Christian Burial that will be held at Historic St. Mary’s Catholic Church located at 119 S. Prince Street in Lancaster PA on Sunday, September 19,2021 at 3:00 p.m. The family will receive friends from 2:00 p.m. until the time of service. Interment will be private. In lieu of flowers, donations in Mr. McDonald’s memory may be made to the Willow Valley Communities Charitable Foundation, 425 Willow Valley Lakes Drive, Willow Street, Pennsylvania 17584- 9662. Please write on check “Memory Unit.” The family is most appreciative of all the Willow Valley Team Members in their efforts to be so thoughtful, caring and kind to all its residents. As Joe was heard saying, many times, “Moving to Willow Valley was the best move Sue and I made in our many years of marriage.” And both are most grateful to the Management and Team Members of this outstanding Community!

Joseph F. McDonald,83, of Willow Valley Communities, Willow Street, PA passed away on Monday, September,13 2021. He is survived by his wife, Sarah &#8220;Suzie&#8221; (Darlington) McDonald of 62 years. He was the son of the late James W. McDonald,... View Obituary & Service Information

The family of Joseph F. McDonald created this Life Tributes page to make it easy to share your memories.

Send flowers to the McDonald family.