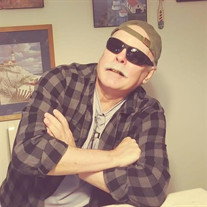 Joseph Mitchell Watts, 63, of Mountville, PA, passed away unexpectedly on Monday, October 11, 2021. Born in Philadelphia, he was the son of the late Thomas Edward and Evelyn Louise (Blankenship) Watts. Joseph graduated from Solanco High School in 1974. After high school, he joined the United States Navy and proudly served in communications for over 20 years. As a Radioman, First Class, his time in the U.S. Navy took him all over the world. He returned to Lancaster 20 years ago after retiring from the U.S. Navy. Joseph was a member of the Catholic War Veterans in Columbia, PA. He was a humble man, always willing to tell the truth, and always quick with a joke. He enjoyed weekends at the beach, spending time with friends and family, and listening to 70’s and 80’s Rock N’ Roll. Joseph is lovingly survived by his three daughters along with their families; his daughter, Gemma and her husband Al, with their children: Deanna, Nicholas, Blu, and Carter. His daughter, Brandy and her husband Raymond. His daughter, Rochelle and her husband Ricky, with their children: Samson, Evelyn, and Violet. He is additionally survived by his siblings, Jean Rivard, Tom Watts, John Watts, and Suzannah Oberman, two nephews, four nieces, and many dear friends. He is preceded in death by his parents, two son-in-laws, and one grandson.

The family of Joseph Mitchell Watts created this Life Tributes page to make it easy to share your memories.

Send flowers to the Watts family.