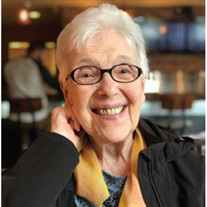 Joyce Wilson Hartman, 91, died at Lakeside at Willow Valley on Saturday, March 27, 2021 surrounded by her daughters. Born in Newport August 11, 1929, she was the daughter of James Mattern Wilson and Mary Jane Metz Wilson. Joyce grew up in Newport with her six younger siblings. She excelled in school, dramatics, and sports, and enjoyed spending quiet time on the banks of the Juniata River. After finishing high school, she came to Lancaster where she trained at the nursing school of Lancaster General Hospital and met her husband, John W. Hartman. Together they raised seven daughters and enjoyed 58 years of marriage until John’s death in 2009. After completing her training as an RN, Joyce became a Certified Registered Nurse Anesthetist, achieving a perfect score on her RN boards and the top score in the nation on her anesthesia boards. After a career of more than 35 years, Joyce retired in 1994, having worked at Lancaster General Hospital, Harrisburg Hospital, St. Joseph’s Hospital in Lancaster, and Holy Spirit Hospital in Camp Hill. She was admired for her extraordinary calm under pressure, her rigorous attention to detail, and her compassionate care. She was named Holy Spirit’s employee of the year in recognition of her professional excellence and extraordinary contributions to the hospital community. An avid reader, Joyce pursued education throughout her life, taking courses part-time at Dickinson College, Penn State Capitol Campus, HACC, and Millersville University. In their retirement, she and John also enjoyed lectures, asynchronous courses, and travel study trips to Italy, China, England, and Scotland. She was particularly interested in art history, philosophy, history, and comparative religions. Joyce sought, recognized, and appreciated beauty and goodness. She demonstrated in support of peace, and when the events of the world became unbearable, she co-founded a poetry group to create a community of insight, solace and comfort. In her retirement, Joyce devoted herself to art, working particularly in watercolor, oil, and especially pastels. Her work was included in many juried shows and won awards from the Lancaster County Art Association, the York Art Association, the Pennsylvania Senior Citizens Show, and several summer arts festivals. She was part of a group of artists known as the West End Gang, and she was profiled in the Lancaster newspaper in 2008. In addition to her husband, she was predeceased by her daughter, Joan L. Hartman (Charlotte-Amalie, USVI), her parents (Duncannon), her brother, James M. Wilson, Jr. (Duncannon) and her sister, Sandra O’Rourke (Danville). Joyce is survived by her daughters and sons-in-law, Susan and Gregg Sayre (Fairport, NY), Julia and Bruce Hunter (Potomac, MD), Rebecca Hartman and Jonathan Cooper (Cleveland, OH), Amy and Todd Nichols (Rochester, NY), Beth and Bill Plonk (Durham, NC), and Mary Hartman and Patrick Mooney (Burnaby, BC), by her grandchildren, Matthew Sayre, Katharine Hinkle, Margaret Connor, Annabel Hunter, Andrew Cooper, Bug Nichols, Ian Nichols, John Plonk, Natalie Plonk, Wilson Plonk, Lila Mooney, and Alex Mooney, and by great-grandchildren, Lea and Arthur Sayre, Grace, Clara and Lila Hinkle, and Sullivan Connor. She is also survived by her sisters, Anne Wilson (Duncannon), Jean Gearhart (Duncannon), Hazel Wright (Lancaster), and Linda Goldhart (Duncannon) and by many nieces and nephews. A celebration of Joyce’s life will be announced at a later date when we are able to gather. In lieu of flowers, memorial contributions in her name can be made to the Lancaster Public Library and/or to the Mathias J. Brunner Nursing Education Fund at Willow Valley, 100 Willow Valley Lakes Drive, Willow Street, PA 17584. (Make checks payable to Willow Valley Communities Brunner Scholarship Fund)

Joyce Wilson Hartman, 91, died at Lakeside at Willow Valley on Saturday, March 27, 2021 surrounded by her daughters. Born in Newport August 11, 1929, she was the daughter of James Mattern Wilson and Mary Jane Metz Wilson. Joyce grew up in Newport... View Obituary & Service Information

The family of Joyce Wilson Hartman created this Life Tributes page to make it easy to share your memories.

Joyce Wilson Hartman, 91, died at Lakeside at Willow Valley on...

Send flowers to the Hartman family.