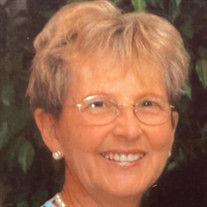 Karen Ernst, 80, died peacefully surrounded by her children on Tuesday, November 9, 2021 at Brethren Village. Born in Beverly, MA, Karen was the daughter of the late Ralph and Edith Palm Reid and the wife of the late John “Jack” Ernst who died in 2015. Growing up in New England, Karen never stopped being a Yankee at heart. She spent her high school years living in North Carolina and during summer visited her Aunt Alma at Crane Beach in Ipswich, MA. After graduation, she went on to the University of Maine earning her bachelor’s degree. She married Timothy Robbins and lived in Ithaca, NY, later moving to Lancaster where she was a stay-at-home mom, she then joined the workforce as a medical technician for Rheumatology Associates. Karen was a proud granddaughter of Swedish immigrants and a very loving mother to her three children, she was very affectionate, and would crawl into bed and give cuddles. She tirelessly involved herself with all the activities her children participated including becoming a gymnastics judge. If you heard music playing you could expect Karen dancing right along, some of her favorite artists were Hall & Oates, Johnny Mathis, and Barry Manilow. She was a self-taught artist and very creative in needlepoint, knitting and margetta. Karen designed her own clothing and did tole painting. After marrying Jack, she was obsessed with golf and loved the beach especially Myrtle Beach. She was an amazing friend with a strong sense of humor, and she loved to laugh. She enjoyed sweets especially pastries. Her cats held a special place in her heart. Karen is survived by a son, Keith Wyatt Robbins (Sarah), Louisville, KY, and daughters, Gayle Alden Hogg (Chip), Kennelow, NJ and Kristina Alma Robbins (Nick Higgins) of Los Angeles, CA, six grandchildren: Henry and William Robbins, Alden and Henry Hogg and Finlay and Scarlett Higgins. The Service has been postponed until a later date. Memorial donations in Karen’s name may be made to Hospice & Community Care, 685 Good Drive, Lancaster, PA 17604-4125, Aids Foundation, Holy Spirit Lutheran Church or Alzheimer’s Foundation.

Karen Ernst, 80, died peacefully surrounded by her children on Tuesday, November 9, 2021 at Brethren Village. Born in Beverly, MA, Karen was the daughter of the late Ralph and Edith Palm Reid and the wife of the late John &#8220;Jack&#8221;... View Obituary & Service Information

The family of Karen Ernst created this Life Tributes page to make it easy to share your memories.

Karen Ernst, 80, died peacefully surrounded by her children on...

Send flowers to the Ernst family.