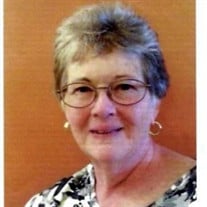 Kathleen Kay Kuzmiak, departed this life on Tuesday, October 5, 2021 at The Mennonite Home after a lengthy battle with multiple myeloma. Kathleen was the daughter of Floyd and Imogene Eleanor Kline Horst. Born on November 17, 1947, at the Mt. Springs Hotel in Ephrata which served as the hospital until 1949. She is survived by many cousins, beloved friends, colleagues and former students. Kathleen graduated from Ephrata High School in 1965. She earned a Bachelor of Science degree in Secondary English at Bloomsburg State College in 1969. In 1972, Kathleen was awarded a Master’s of Education degree on Secondary Counseling from Millersville University. She dedicated her life to a career with the School District of Lancaster, beginning as a History and English teacher at Edward Hand Junior High School where she also advised the school newspaper, co-advised the cheerleading squad and directed the school play. In the 1970’s, Kathy transitioned from a position as guidance counselor at Edward Hand to a counseling position at J. P. McCaskey High School. During these fourteen years, she held several offices in the Lancaster County Counseling Association. She often shared that of all her jobs being a guidance counselor was her favorite. Touching the lives of students as they faced personal challenges, giving pep talks, drying tears redirecting anger and helping them choose a path for their future gave her a sense of fulfillment. Many of these students became lifelong friends. After earning a supervisory and principal certification from Temple University, she was promoted to a position of House Principal at J.P. McCaskey High School in 1987. After three years, she moved to Reynolds Junior High School as principal guiding the school through transition to middle school concepts and organization. In retirement, Kathy continued her forty-year commitment on the Board of the Martin Luther King, Jr., Scholarship Fund. She also served as treasurer for Chi Chapter of Delta Kappa Gamma Society International for 15 years and state finance chair for six years. Her love of cats led her to volunteer with pet shelters, always helping her beloved, Ozzie, Pet, Max, Monet, Sheba and Sara Lee, close to her heart. After retirement from the School District of Lancaster, she worked for Millersville University as an adjunct professor mentoring grad students pursuing their principal certification. Her favorite part time job in later years was as an assistant archivist at the Evangelical and Reformed Historical Society at the Lancaster Theological Seminary. While many of Kathy’s friends were sports fans, she preferred a good book, movies or plays; going to the theatre in Lancaster, Mt. Gretna, Hershey or NYC was a trip to look forward to as was any casino coast to coast. Traveling was her other love with photo albums filled with memories from 12 countries and 45 U.S. states. While she did not complete her “bucket list” to visit all 50 states, she did get to check off Russia with a river cruise in 2012. During her last months in her battle with cancer, Kathy bemoaned the state of affairs in her beloved country. She was extremely saddened by the lack of civility which was accepted at the highest level of our government. The family would like to personally thank the Barshinger Radiation Team, the Oncology Department at Barshinger and Dr. Brislin at Westphal Associates, as well as the staff at the Mennonite Home Rehab for their constant and loving care. Relatives and friends are invited to attend Kathleen’s Life Celebration Memorial Service at The Groffs Family Funeral Home, 528 W. Orange Street (corner of W. Orange & Pine Sts.), Lancaster, PA 17603 on Saturday, October 23, 2021 at 11:30 A.M. with The Rev. Dr. Christopher M. Rankin and The Rev. Richard Berg officiating. Friends will be received at the Groff Funeral Home on Saturday, October 23, 2021 from 10:00 A.M. until the time of the service. The interment will be private at Hopeland United Methodist Church Cemetery. In lieu of flowers, memorial contributions may be sent to Pet Pantry, 26 Millersville Road, Lancaster, PA 17603, Martin Luther King Jr. Memorial Scholarship Fund, P.O. Box 6303, Lancaster, PA 17607-6303, or the Evangelical and Reformed Historical Society, c/o Lancaster Theological Seminary, 555 West James Street, Lancaster, PA 17603 or www.erhistoricalsociety.org. The livestream link for the service is below: https://client.tribucast.com/tcid/1741764561 If the person you are talking to doesn’t appear to be listening be patient, as Winnie The Pooh said “It may be simply be that he has a small piece of fluff in his ear.”

Kathleen Kay Kuzmiak, departed this life on Tuesday, October 5, 2021 at The Mennonite Home after a lengthy battle with multiple myeloma. Kathleen was the daughter of Floyd and Imogene Eleanor Kline Horst. Born on November 17, 1947, at the... View Obituary & Service Information

The family of Kathleen Kay Kuzmiak created this Life Tributes page to make it easy to share your memories.

Send flowers to the Kuzmiak family.