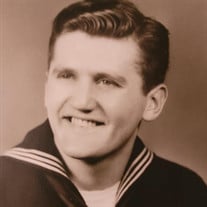 Lloyd George Sellers, 92, of Kingston, NY, passed away on Tuesday, October 26, 2021. Born in Lancaster, PA, he was the son of the late George Lloyd Sellers and Wilhelmina H. (Koehler) Sellers. Lloyd graduated from J.P. McCaskey High School in 1947. He went on to proudly serve in the United States Navy from 1948 to 1951 during the Korean War. For his service, he earned a Purple Heart, Korean Service Medal, and Navy Occupation Service Medal. After returning home, he attended Indiana Institute of Technology in Fort Wayne, IN and earned his bachelor’s degree in Electronic Engineering in 1954. Lloyd worked as a Systems Design Engineer for the SAGE project at IBM, where he had top secret clearance from the Department of Defense. Project SAGE was embraced and successfully developed as the primary air defense system for our county. He worked on many projects over his 35-year career. After his retirement, he volunteered until the age of 90 teaching computer skills to seniors for the Senior Net Program. He spent the last 7 years ensuring that his shipmates on the U.S.S. Brush were memorialized at the Purple Heart Hall of Honor in New Windsor, NY. Lloyd was also successful in ensuring his shipmates that were lost at sea were correctly memorialized in national cemeteries. He enjoyed travelling during his retirement and attending his U.S.S. Raby and U.S.S. Brush reunions. He enjoyed golf, baseball, and hunting, and loved nature and hiking. Lloyd was a member of the VFW Post 1386, and the American Legion Post 150 in Kingston NY, and the IBM Quarter Century Club. Lloyd is survived by his children, Lloyd G. Sellers, Jr., of Gardener, NY, and Sara J. Sellers of Kingston, NY, his grandchildren, Paige Elizabeth and John Lloyd, loving daughter-in-law, Victoria Sellers, Martha L. Sellers, former wife and loving friend, and Pat Shaeffer (Dan) his niece. In addition to his parents, he was preceded in death by his son, John D. Sellers, sisters, Margaret M. Sellers and Jeanette Horting. Relatives and friends are invited to attend a Funeral Service on Monday, November 1, 2021, at 1:00 PM at The Groff’s Family Funeral Home, 528 W. Orange St. Lancaster, PA 17603. Family will receive friends from 12:00 Noon until the time of service. Interment will follow at Conestoga Memorial Park. In lieu of flowers, memorial contributions may be made to the National Purple Heart Hall of Honor, the American Legion, or the VFW. Please do something kind for someone in his memory.

The family of Lloyd George Sellers created this Life Tributes page to make it easy to share your memories.

Lloyd George Sellers, 92, of Kingston, NY, passed away on Tuesday,...