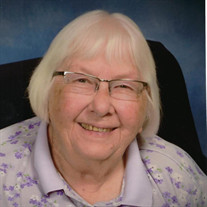 M. Fay Goddard, 90, of Lancaster, PA died Friday, February 25, 2022, at Calvary Homes in Lancaster. Fay was born into a family that included not only mother, father, and five-year old big brother Bill, but her mother’s father (“Gramps”) and sister (“Auntie Doll”). The Great Depression had pushed the two households together into a two-bedroom bungalow near Seattle’s southern city line. Baby Patrick’s appearance nineteen months after Fay tightened the squeeze. In 1936, when the family was expecting child number four (Irving), God provided a five-bedroom, two-bathroom house in the neighborhood – with a view of Lake Washington – for $900! Fay and family thrived in that house. With mustache and bushy eyebrows, Gramps was the family’s closest touch with the generations that pioneered the west. His big easy chair hugged the fireplace in the many-windowed living room. Fay’s father, strict and self-disciplined, was kind to man and beast and self-giving. Though a messy housekeeper, Mom was a great homemaker. Both she and Auntie Doll were good cooks. The Goddards attended Rainier Beach Presbyterian Church. Other than home, no place was more important in Fay’s life than Lake Sammamish Bible Camp, east of Seattle. There God broke through Fay’s spiritual blindness, and she saw Jesus standing at her heart’s door, knocking and knocking. After lights out that night when she was almost twelve, she threw that long-closed door open and let the Savior in. Though she was asleep before she finished praying, in the morning her joy in being God’s child would hardly let her feet touch the ground. Fay grew in every way over the years there at Sammamish – particularly in her knowledge of God’s Word and ways. Believing God was calling her to China as His ambassador, after high school Fay studied Chinese culture and language, including the written, at Seattle Pacific College and went on to graduate from Prairie Bible Institute in Alberta, Canada. Within five months of graduation Fay was on board ship on her way for orientation and language study at Overseas Missionary Fellowship’s headquarters in Singapore, halfway around the world. Surprisingly Fay was designated to serve among the tribal people of the Philippines, not among the Chinese of Malaysia or elsewhere, despite what was written in the files. But the “mistake” was of God, as He had a plan “up His holy sleeve,” as Fay often put it. Fay joined Canadian Marie Barham, a mid-fifty-year-old who had made a small, but arduous start among the Buhid tribal people of Mindoro Island’s mountains, and newlyweds Bob and Joy Hanselman to make a team of four. Fay would help Marie inland from Salcedo; Bob and Joy, supported by Calvary Church of Lancaster, would spread the Gospel of God’s love in new territory inland from Bongabon. Besides studying the language, at first Fay’s main contribution was lugging the hand-wind phonograph and Gospel Recordings as she and Marie trekked through the jungle from small gathering of huts to another. After three years Marie died of cancer. Fay finished the term alone, nurturing the beginnings of a Buhid church. Only seven weeks after returning from furlough in mid-1960, however, she contracted polio and was paralyzed from the waist down. She spent the next year as God’s plant between the Manila Sanitarium and Seattle’s U of W Hospital in rehab. Fay became an editor for OMF, first in Philadelphia, then in Robesonia, and finally here in Lancaster. She produced East Asia’s Millions, the mission’s magazine, for twenty-eight years, finishing her forty-two years of active service for OMF editing mission books, mostly biographies. One year she filled in for OMF’s international editor. Outside the office Fay and her housemates reached out to international students, professionals, children, older neighbors, and fellow missionaries. The welcome mat was always out. Fay loved people. In her nearly thirty years here in Lancaster, she was often seen enjoying conversation, games and prayer with folk, both at OMF’s Lammermuir community and Calvary Homes. Fay was an overcomer. Her wheelchair didn’t slow her down very much. Hers was a well-lived life – all the way. Friends are invited to her Celebration of Life Memorial Service on Thursday, March 3, 2022 at 2:00PM at Calvary Homes, 502 Elizabeth Drive, Lancaster, PA. In lieu of flowers contributions in her name can be made to OMF - https://omf.org/us

The family of M. Fay Goddard created this Life Tributes page to make it easy to share your memories.

Send flowers to the Goddard family.