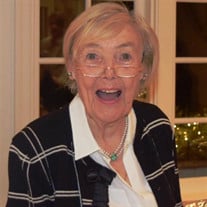 Margaretha "Gretel" Dodge died peacefully at home on Sunday, October 23rd surrounded by her family and weeks shy of her 87th birthday. Gretel, the daughter of the late Gotthold Gerbert and Helene Gebhardt Gerbert was born in Mannheim Germany on November 17th, 1929. The youngest of two daughters, Gretel was predeceased by her older sister Dr. Doris Gerbert. Gretel remembered her childhood as one filled with music and love. She idolized her maternal grandmother who was a businesswoman and the first female member of the Mannheim City Council. Life changed dramatically with the onset of World War II. Gretel revered her father who died when she was only 13. Her later business career was fueled by her commitment to carry on the Gerbert name. Gretel, her mother and sister relocated to a small village outside Heidelberg, Germany where Gretel attended Gymnasium and University. Gretel also worked while studying to provide for her mother and help her sister attend medical school. Her early business experience was telling as she survived by dealing in the black market, which she thought was adventurous. Gretel earned a Master of Fine Arts degree in 1951 from Heidelberg University where she studied ballet, drama and opera. She spent one year performing with the German State Opera in Dettmold. In 1952 while subbing for her roommate who worked at the Allied Forces Officers Club in Heidelberg, Gretel met Captain Arthur Dodge, the man who would eventually, after much hard work and hundreds of letters, become her husband. Prior to her marriage, Gretel worked at the Hotel Europaischer Hof as an Ass't Manager hosting statesmen and dignitaries such as Dwight and Mamie Eisenhower. Gretel resisted but ultimately surrendered to Arthur's persistence and they were married in December 1954, after which she relocated to Arthur's hometown, Lancaster, PA. Arriving in Lancaster in the 1950's as a German national was no easy task. Gretel addressed Lancaster with the same elegance, sophistication, guts and determination that marked the remainder of her life. She gave birth to two sons, Arthur III in 1956 and Andrew in 1958. She had joined the Junior League of Lancaster ascending to leadership positions within the organization. She was well known in the early 1970's for leading the Junior League's annual Christmas Around the Tree event at the former Williamson estate. She also joined the St. Joseph's Hospital (now Lancaster Regional) Auxiliary where she learned retailing skills managing the gift shop. She bought and resold Amish quilts which she marketed in New York, Chicago and Los Angeles. This all led to her starting her own business, the Cork Corner Factory Store on Shippen St. Her love for Martha’s Vineyard off the coast of Massachusetts inspired the opening of the Cork Corner of Edgartown which remained vibrant until the late 1990’s. She and Arthur traveled frequently to Sea Island, GA to inhale sea air, imbibe in vintage reds and imprint their love for one another on the Georgia coastline. Of course, she drove the entire 13 hour trip while simultaneously yelling at Arthur and any unlucky motorist who crossed her path on the highway. In the early 1980's Gretel took over a small natural cork importation and distribution business from Dodge Cork Co. her husband’s business. She later renamed the company Gerbert Ltd. which with the help of her son Andrew grew into a leading US, woman owned cork and commercial floor covering distributor. Gretel was tireless and a serial entrepreneur, She loved her family, her businesses and the Lancaster Community. Gretel was a devout Catholic her entire life. She was an anonymous benefactor to local charities and St. Judes Children's Hospital. She continued to work daily until she became ill in July of this year. A cancer survivor, she remained devoted to her employees and her health building a corporate gym and hiring a weekly trainer. Recently, she began Tai Chai lessons proclaiming, "I never really knew how to walk correctly" at 85. Gretel was a perfectionist, she hated borrowing money, but retained an impish sense of humor. Anyone who knew her can never forget her. Gretel is survived by her sons Arthur III and Andrew both of Lancaster, their wives Justina and Lorraine; six grandchildren, Marc (Dublin, Ireland) , Natalie and Emilie (New York City), Alexandra, Sabrina, Hayden; two step grand-daughters, Camilla and Sloane Grover-Dodge and her beloved rescue dog Sophie. She was pre-deceased by her husband and best friend, Arthur B. Dodge, Jr. The family would also like to thank Gretel’s primary care givers during the past three months, Cindy Landis, Sheri Hershey and Wanda Rubio. Relatives and friends are respectfully invited to attend a Funeral Service with a Requiem Mass on Tuesday, November 1, 2016 at 10:30 a.m. at St. James Episcopal Church, 119 N. Duke Street, Lancaster, PA, with The Reverend David W. Peck Celebrant and The Right Reverend Peter D. Eaton Preacher. The family will greet friends from 9:30 a.m. until time of service. Private family interment in Lancaster Cemetery. In lieu of flowers, memorials may be made in Margaretha’s name to Hospice & Community Care, PO Box 4125, Lancaster, PA 17604-4125 or www.hospicecommunity.org.

Margaretha "Gretel" Dodge died peacefully at home on Sunday, October 23rd surrounded by her family and weeks shy of her 87th birthday. Gretel, the daughter of the late Gotthold Gerbert and Helene Gebhardt Gerbert was born in Mannheim Germany... View Obituary & Service Information

The family of Margaretha "Gretel" Dodge created this Life Tributes page to make it easy to share your memories.

Send flowers to the Dodge family.