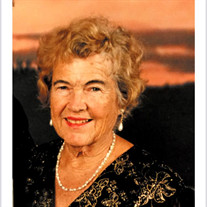 Marguerite E. Kreider, 88, of Manheim, PA, died peacefully on Saturday, January 2, 2021 at Pleasant View. Born in Lancaster, PA, she was the wife of Dr. Walter Kreider, Jr., and they celebrated their 66th wedding anniversary on Dec 26, 2020. She was the daughter of the late Charles and Margaret Aument Portser. She was a member of Church of the Apostles, United Church of Christ and graduated from Millersville University in 1954 with a Bachelor’s Degree in elementary education. As a newlywed, Peggy taught first grade at Lafayette Elementary in Lancaster. Her passion was to instill a lifelong love of learning to all children, but for those who struggled with reading, Peggy found creative ways to reach and teach the children, continuing this in private instruction at home after she left the classroom. She loved all things music, singing, playing piano, organ and clarinet. Being a 50+ year member of Lancaster’s Malta band brought her much joy. Peggy was a member of the Millersville University Campus and Women’s clubs. Alongside her husband, Walt, Peggy was a wonderful assistant and support, accompanying university students on international educational tours, notably to Western Europe. These experienced travelers expanded the horizon for their children by taking an extended family trip around the USA and Mexico - with a trailer in tow! This special time created an incredible family bond and love of adventure for all of them. Peggy’s love of travel provided some of the richest experiences in her golden years – she and Walt had the opportunity to experience many cultures throughout the world. They formed significant and lasting friendships with people from many nations, from Japan to the Holy Lands, Central and South America to name just a few. Peggy was blessed to see so much of the world. On the domestic front, Peggy’s enthusiasm for life manifested itself in her passion for all things related to the beach, summers were best at the Jersey shore. She loved to have her children and grandchildren come share the sun and sand, but every day was special at the beach, spending long days in the sun and evening strolls with her best friend and love Walt. Peggy’s love of music, travel, and joyful activity found her spending winters in Florida among her friends at the many Orlando attractions. A Disney enthusiast, she spent her days smiling and singing along with the diverse attractions offered at Disney World. She could be found at Epcot Center, Sea World, Busch and Cypress Gardens, as well as at Universal Studios. Leaving the fun and sun was always a challenge but coming home to Lancaster for the holidays was equally special for Peggy and she threw herself into transforming their home into a winter wonderland of music, color and lights. Welcoming family and hosting an annual open house was an important part of the season for her while she had her health. When Peggy’s health necessitated a transition to assisted care, she bore the transition with grace and beauty. She brightened her surroundings for everyone, bringing her Disney friends and flashy hats with her to turn everyday into an occasion for smiles. To the very end, Peggy continued to enjoy her favorite things – singing and being surrounded by those she loves. On December 21st, just days before she was taken to the hospital, Peggy called Walt to visit but when he didn’t answer she sang the entire score of Rudolph the Red Nosed Reindeer! What a treasure to have that recorded on his voice message. The challenges of isolation during the pandemic were very difficult but Peggy could be seen smiling and waving at her window guests and figuring out the technology for an occasional Face Time or ZOOM visit. We are so thankful that in this last week, Peggy was able to be surrounded by family and spend precious time with Walt before she was called home to her Eternal rest. To summarize this dear wife, mother, and friend would be to say that Peggy first and foremost loved the Lord Jesus, sought to know Him and make Him known to her family while living a life that brought honor to Him and joy to those around her. In addition to her husband, Peggy is survived by her children, Walter Kreider, III, husband of Shauna (Anderson) Kreider, Rockville, MD and Vicki K., wife of Karl Kassees, Landisville, PA. Grandchildren include Walter Soren Kreider IV, husband of Joanna (Stack) Kreider, Seth B. Kreider, Kayla R. Kassees, and Ryan M. Kassees, and one great grandson, Walter Liam Kreider V. Relatives and friends are invited to attend Peggy's Funeral Service at The Groff’s Family Funeral Home & Cremation Service, 528 W. Orange St., (corner of W. Orange and Pine Street), Lancaster, PA on Friday, January 8th, 2021 at 4:00pm, with the Reverend Kathryn L. Kuhn officiating. The family will receive friends beginning at 3:00pm until the time of service. The family wishes to make available a live webcast of the service starting on Friday, January 8th, 2021 at 4:00 p.m. that can be found at https://client.tribucast.com/tcid/98663330

Marguerite E. Kreider, 88, of Manheim, PA, died peacefully on Saturday, January 2, 2021 at Pleasant View. Born in Lancaster, PA, she was the wife of Dr. Walter Kreider, Jr., and they celebrated their 66th wedding anniversary on Dec 26, 2020.... View Obituary & Service Information

The family of Marguerite E. Kreider created this Life Tributes page to make it easy to share your memories.

Send flowers to the Kreider family.