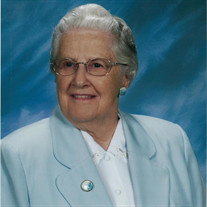 Peg passed away peacefully at Mennonite Home on Monday, February 7, 2022. She celebrated her 101st birthday last October. She was the wife of J. Glenn Walz for 55 years, who passed away in 1995. She was born in Lancaster, the daughter of Ross and Jessie Funk Herr and lived in Lancaster her whole life. She was pre-deceased by siblings Claude, Robert, and Beulah. She was proud of the fact that she was the ninth generation of Hans Herr. She was in the first graduating class of McCaskey High School in 1938. After graduation she worked at the Hamilton Watch Co. Later she worked at Oblenders Furniture Store where she met her husband, Glenn. They were married at Covenant United Methodist Church in 1941 where she has been a member for over 75 years. When Glenn joined the Army, he was assigned to Louisville, Kentucky and she joined him there. Later, during the Korean War, he was sent to Germany. She and her son Glenn joined him there for several years. She spoke of this adventure as being a favorite time of her life. After retirement, one of the pleasures they shared was traveling throughout the states and much of the world. She also was involved in Meals on Wheels, the flower ministry at church, and worked as an aide at Lancaster Brethren Preschool. She was an outgoing, friendly woman who encouraged others and sought ways to help those in need. She loved making a home for animals, especially cats. She is survived by a son, Glenn R. (Gail) Walz and a daughter, Lynn W. Arnold. 4 grandchildren, David Walz, Jill Arnold Bull, Mark Cheramie Walz, Elizabeth Arnold Raff and 7 great-grandchildren with a new one expected soon. Her grandchildren and great-grandchildren brought her much joy. The family would like to thank her caregivers at Mennonite Home for the loving care they gave her. They would also like to thank Hospice for making her end of life comfortable. A celebration of her life will be at Covenant United Methodist Church at 110 N Mulberry St., Lancaster, PA 17603 on Saturday, February 26, 2022, at 10 a.m. The family will receive friends at the church from 9 a.m. until time of service. Private Interment will follow. In lieu of flowers, gifts in her memory may be made to Covenant United Methodist Church or the Benevolent Fund at the Mennonite Home, 2001 Harrisburg Pike Lancaster, PA 17601.

Peg passed away peacefully at Mennonite Home on Monday, February 7, 2022. She celebrated her 101st birthday last October. She was the wife of J. Glenn Walz for 55 years, who passed away in 1995. She was born in Lancaster, the daughter of Ross... View Obituary & Service Information

The family of Marguerite Herr "Peg" Walz created this Life Tributes page to make it easy to share your memories.

Peg passed away peacefully at Mennonite Home on Monday, February...

Send flowers to the Walz family.