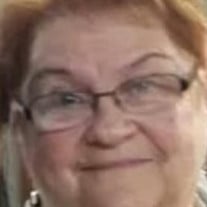 Marianne (Schmalhofer) Johnson, 78, of Lancaster, PA, formally of Pottsville, PA, passed away on Friday, October 29, 2021. She was the daughter of the late Mathias and Eleanor (Wickenheiser) Schmalhofer. Marianne grew up in Cabbage Hill and attended J.P. McCaskey High School. She was a fearless, hardworking woman, often having multiple jobs to raise her 6 children on her own. She worked as a nurse’s aide at Rest Haven and retired from Dart Container in Leola. Marianne was “everybody’s mom,” and was the house all her kid’s friends wanted to be at. She was well loved, and highly respected by all. She loved spending time with her grandchildren and enjoyed going to the beach and being in the woods. She adored her Pitbull Moscow and her black cat Jinx. Her favorite music was Alabama and Pitbull. She was a fan of the Green Bay Packers, New York Yankees, Boston Celtics, and Notre Dame. She is survived by her children: Brenna L. Ober, of Ephrata, PA, Shannon M. Stevens (Robert) of Lancaster, PA, Dwayne E. Johnson (Julia) of Mechanicsburg, PA, DimitaJo A. Ashby (Richard) of Leola, PA, Ranzy V. Penn III (Michelle) of Philadelphia, PA, and Chavon R. Pratt (Richard) of Ephrata, PA, her brother, Edward Schmalhofer of Lebanon, PA, 21 grandchildren, 16 great-grandchildren, many nieces and nephews and a large extended family. In addition to her parents, she was preceded in death by her sister, Eleanor Turner, and former husbands, Robert P. Johnson, and Ranzy V. Penn II. Family and friends are invited to a Memorial Service on Saturday, November 6, 2021, at 2:00 p.m. at The Groffs Family Funeral Home, 528 W. Orange Street, Lancaster, PA 17603. In lieu of flowers, please make a donation in Marianne’s name to St. Jude’s Children’s Research Hospital.

Marianne (Schmalhofer) Johnson, 78, of Lancaster, PA, formally of Pottsville, PA, passed away on Friday, October 29, 2021. She was the daughter of the late Mathias and Eleanor (Wickenheiser) Schmalhofer. Marianne grew up in Cabbage Hill and... View Obituary & Service Information

The family of Marianne Johnson created this Life Tributes page to make it easy to share your memories.

Send flowers to the Johnson family.