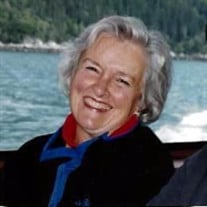 Martha F. Kirkpatrick Bray, 88, passed away on Tuesday, March 2, 2021 at Manor Care Health Services, where she was receiving care after surgery. She was born in Houston, TX to Dr. Louis P. and Winnie Davis (Sykes) Kirkpatrick. She was married 43 years to her husband, Ralph “Bud” V. Bray Jr. who died in 1996. Her early years were spent in Houston. She graduated from high school in Tsingtao China, where her father was stationed and served as a Captain in the Navy and surgeon for the first MASH Unit during the Korean Conflict. Martha graduated with a Baccalaureate in English Literature from Randolph Macon College in Lynchburg VA, and met her future husband, Bud, who graduated from Washington and Lee in Lexington VA. They were married in 1953, moved to Florida where Bud served as a lieutenant in the U.S. Navy. After his service, Bud accepted a job in the Advertising Department of Armstrong World Industries and they moved to Lancaster. Martha was very active in the Lancaster community, volunteering for and supporting many organizations. She was a founding member of the Community Gallery (Lancaster Museum of Art) where she was a docent and in charge of the gallery store. Involved in early recycling efforts, she was the director of Lancaster Environmental Action Federation (LEAF). She served as the president of the Junior League in 1972. She volunteered at the Lancaster Public Library for many years and was a board member of PA College of Art and Design. Martha was an early and lifelong member of St. Thomas Episcopal Church and served on the altar guild committee. Martha and Bud enjoyed extensive traveling, including trips to Kenya, China, Greece, Europe, Great Britain, The Cayman Islands, where Bud enjoyed scuba diving, and they visited many US National Parks. They spent the winters in Puerto Vallarta, Mexico. After Bud passed away, Martha continued her travels with friends to Russia, the Galapagos Islands, South America and South Africa. She enjoyed chronicling her many trips. Martha loved playing golf, tennis and bridge. She enjoyed reading, art, music, theater, and dogs! She raised a few litters of both cats and dogs over the years and the family home was enlivened with a myriad of pets. Martha is survived by a son, R.V. (Chip) Bray III, married to Edna, of Elizabethtown; a daughter, Gaylen Bray, married to Tom Wanamaker, of Lancaster. Three grandchildren also survive her, Kirk Bray, married to Bridget, of Downingtown; Alison Bray, of Lancaster and Wyatt Bray Dranchek, married to Helena, of Mountville. She has one great-grandchild, Kieran Bray, of Downingtown; a sister, Mary Lynn Jacobson, of Columbus, Ohio; seven nieces and nephews, and nine great-nieces and nephews also survive her. Martha was full of laughter, love and had a “joie de vivre” which was contagious to all who met her! She will be deeply missed by her family and many friends who were so dear to her. The family will hold a private Celebration of Life Gathering later this year. In lieu of flowers, donations can be made to the Lancaster Public Library, the Lancaster Museum of Art, and the Humane League of Lancaster County.

Martha F. Kirkpatrick Bray, 88, passed away on Tuesday, March 2, 2021 at Manor Care Health Services, where she was receiving care after surgery. She was born in Houston, TX to Dr. Louis P. and Winnie Davis (Sykes) Kirkpatrick. She was married... View Obituary & Service Information

The family of Martha F. Kirkpatrick Bray created this Life Tributes page to make it easy to share your memories.