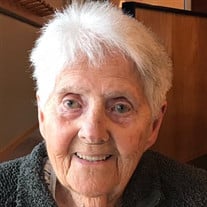 Mary Jane Montgomery, 92, of Lancaster, PA, passed away on Monday, April 12, 2021. Born in Lancaster, she was the daughter of the late Christian Gast and Florence Marie (Martin) Gast. She was married to William Paul Montgomery for 35 years until his death in 1983. Brothers, Conrad Gast and Amos Gast (her twin), and sister, Florence (Gast) Staman, preceded her in death. She is survived by daughter, Darlene M Schaffer, partner of William Garner, Cornwall, PA, Denise C. Pfeiffer, married to Donald R. Pfeiffer of Lancaster and William Paul Montgomery, Jr, married to John Zittel of Spring City, PA. Her grandchildren are Joshua Paul Schaffer, Christian C Pfeiffer, Melissa M Keares, Zachariah Z. Pfeiffer, Kira A. Montgomery-Zittel and Kyle C. Montgomery-Zittel. Also special in her life were her four great-grandchildren, Alecks, Ashley, Elene and Sevasmia. Mary was a hard worker and had many positions. She was a toy manufacturer at Hubley Manufacturing Company, a food service worker at Lancashire Hall, Elby’s Resturant, Manheim Township School District and Lancaster Catholic High School, an assembly worker at Datcon Instrument Company, a clerk at Lancaster Lung Association and baker at Stauffers of Kissel Hill. When Mary Jane worked at Manheim Township School cafeteria, she left her love for others on the children. Many of the children knew they had a friend in her and were excited to see her at lunchtime. Many grew to call her Grandma and looked forward to her extra portions of food that she put on their trays. Once you met Mary Jane you were her friend. Usually when she ended her time with you, she told you she loved you. She had many friends which was evident when you went away with her. Everywhere she went she knew someone. Mary was full of life and always willing to listen. She loved to cook, bake and watch “her” Phillies. She loved traveling to Ocean City, NJ, sitting outside in the sun and socializing with friends and family. A woman of strong faith, she attended First Reformed and Grace United Church of Christ, Lancaster PA. She always told her children and grandchildren that the “good man above” was watching over her. She instilled being kind to others by telling her family, “if you can’t say something nice about someone, don’t say anything at all”. A private family burial will be held. In lieu of flowers, the family requests donations be sent to VisionCorps, 244 N. Queen Street, Lancaster PA 17603 or online at www.visioncorps.net

Mary Jane Montgomery, 92, of Lancaster, PA, passed away on Monday, April 12, 2021. Born in Lancaster, she was the daughter of the late Christian Gast and Florence Marie (Martin) Gast. She was married to William Paul Montgomery for 35 years... View Obituary & Service Information

The family of Mary Jane Montgomery created this Life Tributes page to make it easy to share your memories.

Mary Jane Montgomery, 92, of Lancaster, PA, passed away on Monday,...

Send flowers to the Montgomery family.