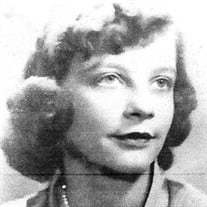 Mary Lou Auer Heidig, 84, formerly of Lancaster, PA, died Saturday, July 31, 2021, at Pleasant View Retirement Community, Manheim, PA. She was the daughter of the late William Auer and Helen Grostefon Auer. She was married for 61 years to William T. Heidig, who died in 2015. A lifelong Lancaster resident, Mary Lou attended J.P. McCaskey High School and was briefly employed at Fulton Bank. She was a former member of the 8th Ward Club and of the Elks Club, where she enjoyed bowling. She also liked to play cards with friends and sew. Mary Lou and her late husband were members of St. James Episcopal Church in Lancaster. Mary Lou is survived by two daughters, both of Lancaster: Connie Heidig and Kathleen Fultineer (Fred), and a son, William T. Heidig of Media, PA. Survivors also include 10 grand- children and 11 great- grandchildren. In addi- tion to her husband, she was preceeded in death by her sister Norma Plumer. Friends and family are invited to Mary Lou’s Funeral Mass on Friday, August 6, 2021 at 11:00 A.M. at St. James Episcopal Church, 119 N. Duke St., Lancaster, PA 17602. The family will receive visitors at the church from 10:00 A.M. until the time of service. A private family Interment will be held at a later date in the St. James Memorial Garden. Mary Lou’s family wishes to thank the staff members at Pleasant View and Hospice and Community Care for their loving and expert care. In lieu of flowers, memorial contributions in Mary Lou’s name may be directed to the Humane League of Lancaster, 2195 Lincoln Highway East, Lancaster, PA 17602.

The family of Mary Lou Heidig created this Life Tributes page to make it easy to share your memories.

Send flowers to the Heidig family.