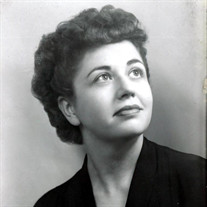 Mary Andes Mumma departed this life on February 8, 2021, at the age of 98. Born in Lancaster, PA, to Giles R. and Eva Boyd Andes, she interrupted her mother’s washday on Monday, November 20, 1922. She attended Reservoir Elementary School and Manheim Township High School. She was married to Harold “Bucky” Mumma, who preceded her in death in 1996. A proud career woman, Mary began her employment at Armstrong working in the secretarial pool where she honed her considerable secretarial skills for twelve years. As a young woman eager to experience a bigger world, she responded to a job advertisement in the New York Times posted by philanthropist Stephen Richard Currier, whose wife, Audrey Bruce, was the oldest grandchild of Andrew W. Mellon. She quickly rose to the position of Mr. Currier’s executive secretary and became integral to their philanthropic and family affairs. Working with the Curriers, who were supporters of the Civil Rights Movement in the 1960s and voter registration efforts in the south, afforded Mary the opportunity to meet such luminaries as Harry Belafonte and Eleanor Roosevelt. One day, Mr. Currier asked Mary to meet a guest who would be entering the residence through a little-used door off the back alley at the office at 666 Fifth Avenue. There she greeted Dr. Martin Luther King, Jr. and escorted him to Mr. Currier’s office. Mary managed the family’s affairs at their Virginia horse farm, Kinloch. A devoted horse rider in her own right, while at Kinloch, Mary had the thrill of riding with the Orange County Hunt. She was a member of Quentin Riding Club, enjoyed foxhunting, and showed horses for foxhunters in Virginia and Chester County. Returning to Lancaster, she accepted the position of executive secretary to Paul G. Wedel, CEO of Lancaster General Hospital and served in that capacity for 24 years. After Bucky’s death, she took a volunteer position at the Lancaster County Historical Society (now LancasterHistory). In her long tenure there, she served for several years as executive secretary and continued her work as a volunteer for decades, scanning newspapers and making clippings for research files, handing over her final batch of clippings in early 2021. Even at 98, she continued to enjoy the company of many friends--some two-legged, some four-legged. She considered herself richly blessed by several very close friends, she was deeply grateful for the outstanding women and men who cared for her at Brethren Village, and she counted on the supportive community at Grace Evangelical Lutheran Church in Lancaster. In addition to her parents and husband, Mary was predeceased by a brother, William B. Andes. A private service will take place at Grace Evangelical Lutheran Church on Tuesday, March 2, 2021. The service will be available for viewing on March 2, 2021 after 3:00 p.m. at the following link: https://client.tribucast.com/tcid/32232460 In lieu of flowers, memorial contributions may be made to Grace Evangelical Lutheran Church or LancasterHistory.

Mary Andes Mumma departed this life on February 8, 2021, at the age of 98. Born in Lancaster, PA, to Giles R. and Eva Boyd Andes, she interrupted her mother&#8217;s washday on Monday, November 20, 1922. She attended Reservoir Elementary School... View Obituary & Service Information

The family of Mary Andes Mumma created this Life Tributes page to make it easy to share your memories.

Send flowers to the Mumma family.