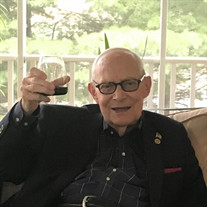 Melvyn “Mel” Paul Rozelle, 86, passed away peacefully at his Lancaster home, surrounded by his family, Thursday morning, December 17th due to COVID 19. Mel was born in Scranton, PA to the late Joseph Charles and Blanch (Kornesky) Rozelle. He was married to his wife Shirley J. (Bath) Rozelle for nearly 60 years. Mel served his country proudly as a member of the U.S. Army. After his service, he moved to Northern New Jersey, a region he was proud to live most of his adult life. It was at a nightclub in Wildwood, NJ that he met the love of his life and the mother of his children, Shirley. Mel had a dynamic and successful professional career. He served as President of GenCorp in NYC, Vice President of International Telephone and Telegraph and the National Corrosion Engineer for Sherwin Williams N.A. Mel was also awarded the Dale Carnegie Highest Achievement Certification and Leadership Award. He is well known and respected by all clients, restauranteurs, and hotel managers from New York to Lancaster. He was a member of the elite Sherwin Williams President’s Club, the Atlantic City Casino Association and New York City Craftsman Association. He and Shirley retired to Lancaster to be closer to family and he worked with his son-in law at Paul Davis and served on Lancaster County Safety Council. He had a pure joy and love for business and enjoyed providing counsel and mentorship over a glass of Merlot or a cup of coffee. Mel’s quote to succeed by was “never refuse the coffee”. Mel was a voracious reader, who loved all sports and was a fan of the Yankees and NY Football Giants. He and Shirley enjoyed an active and fun social life with friends and family. His excitement when his children and grandchildren came to town was evident in showing them a great time as a New York City tour guide and later, the beauty of Lancaster. In addition to his wife, Mel is survived by his three daughters, Melissa B. Rotay (Steve) of Lancaster, Traci B. Frederick (Kent) of Chester Springs, PA and Allyson A. Grecco (Jason) of Oceanview, NJ. He adored his grandchildren: Taylor, Samantha, Blair, Haydn, Nicolette and Joseph. A Celebration of Mel’s Life will take place in the future to allow the family to do it with the style that Mel deserved. He will be interred at the family plot in Whiting Memorial Park and Mausoleum, located in Whiting, NJ. Memorial contributions in Mel’s name are appreciated to St. Jude Children’s Research Hospital at stjude.org.

Melvyn &#8220;Mel&#8221; Paul Rozelle, 86, passed away peacefully at his Lancaster home, surrounded by his family, Thursday morning, December 17th due to COVID 19. Mel was born in Scranton, PA to the late Joseph Charles and Blanch (Kornesky)... View Obituary & Service Information

The family of Melvyn Paul Rozelle created this Life Tributes page to make it easy to share your memories.

Melvyn “Mel” Paul Rozelle, 86, passed away peacefully at his...

Send flowers to the Rozelle family.