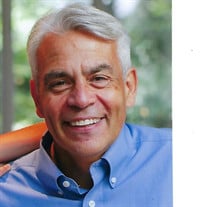 Michael Anthony Del Terzo, M.D., 61, of Lancaster, passed away peacefully surrounded by family at his home on Friday, September 11, 2020. Born in Bogotá, Colombia, he was the son of the late Julius Robert Del Terzo, M.D., and Helen Donio Del Terzo, R.N. His wife of twenty years, Wendy Nes Del Terzo, his son David Julius Robert Nes Gulick Del Terzo, and his brother, J. Robert Del Terzo, survive him. Mike and his brother were raised in Greenwich Village in an apartment above their father’s surgical practice. He attended grammar school at The Church of Saint Luke in the Fields in the West Village of New York City, where he later married his wife Wendy in 2000. He attended Xavier High School, a Jesuit school for boys in Manhattan, where he formed extraordinary lifelong friendships with his Xavier brothers—many of whom attended New York University with Mike. They still remain friends and have been with him through this journey from the beginning. Following his undergraduate studies, Mike received his Master of Science from Georgetown University in 1984 and his medical degree from Georgetown School of Medicine in 1988. He became board certified by The American Board of Urology in 2000. Numerous awards were bestowed upon Mike, including the Dean’s Teaching Excellence Award in 2001 and 2002, Chief Residents’ Faculty Award in 2000 and 2002, and the Family Medicine Teaching Award in 2001—all from The University of Texas Medical School. Mike was an Assistant Professor of Urology at The University of Texas Health Science Center and Chief of Urology at The Institute for Rehabilitation and Research (TIRR) in Houston, Texas, from 1998 to 2003. In 2003, Mike and his family moved to Lancaster, PA, where he joined Urological Associates of Lancaster, which later became Lancaster Urology (now Keystone Urology). He practiced medicine and surgery at Lancaster General Hospital, the Physicians’ Surgery Center, Women & Babies Hospital, Ephrata Community Hospital, UPMC Lititz, and Lancaster Regional Hospital. He was a dedicated physician and surgeon, beloved by his patients, doctors, nurses, and all who knew the extraordinary care he gave to all. Mike proudly served his country as Lieutenant Commander in the Medical Corps in the United States Navy from 1991-1992 and as Lieutenant in the Medical Corps from 1985-1991. In 1991 he was Assistant Division Surgeon, 2nd Marine Division, during Operation Desert Storm in Kuwait. From 1989-1991 he was Battalion Surgeon, 2nd Battalion 4th Marines, during Operation Desert Shield in Saudi Arabia and Operation Sharp Edge in Liberia. He performed medical missions at Albert Schweitzer Hospital in Haiti in 1997 and Bien Vinh Hospital in Ho Chi Minh City, Vietnam in 2000. Mike was a member of St. James Episcopal Church since 2009 and served as a board member for the Lancaster Center for Classical Studies since 2010. He held memberships at the New York Athletic Club in New York City, The Nassau Club in Princeton, New Jersey, Greenspring Valley Hunt Club in Owings Mills, Maryland, and Lancaster Country Club. Mike was diagnosed with Amyotrophic Lateral Sclerosis (ALS), also known as Lou Gehrig’s Disease, in June of 2018. The Department of Veterans Affairs determined that Mike’s ALS was 100% Service Connected, due to his service in Gulf War I and at Camp Lejeune. A devoted husband, father, physician, surgeon, man of faith, veteran, healer, and comforter, Mike was a friend to all—especially those in need and the forgotten. With his humor, wit, compassionate heart, selflessness abounding, intense curiosity, love of learning and family first and foremost, Mike made a profound difference in the lives of many. Mike fought a long, hard battle against ALS with great courage and honor, inspiring all those fortunate enough to know him. Friends and family are invited to attend Mike’s Requiem Mass via Livestream on Saturday, September 19, 2020 at 11:00 a.m. by clicking on the funeral link on the St. James Episcopal Church homepage at www.saintjameslancaster.org. A viewing will be held at The Groffs Family Funeral Home, 528 W. Orange Street, Lancaster, PA, on Friday, September 18, from 5:00 p.m. to 7:00 p.m. There will be a Memorial Service to celebrate the life of Mike one day in the future when it is safe for family and friends to gather together. Memorial contributions in Mike’s name can be made to ALS Research at Penn State Hershey Medical Center. Checks should be made payable to Penn State University – ALS Center and sent to Zachary Simmons, MD, Penn State Hershey Medical Center, (RESEARCH), Department of Neurology, EC 037, 30 Hope Drive, Hershey, PA 17033 or ALS Hershey Clinic, which provided invaluable care to Dr. Del Terzo and his family throughout his illness. Please specify the ALS Hershey Clinic, The ALS Association Greater Philadelphia Chapter (Patient Services), 321 Norristown Road, Suite 260, Ambler, PA 19002.

Michael Anthony Del Terzo, M.D., 61, of Lancaster, passed away peacefully surrounded by family at his home on Friday, September 11, 2020. Born in Bogotá, Colombia, he was the son of the late Julius Robert Del Terzo, M.D., and Helen Donio Del... View Obituary & Service Information

The family of Michael Anthony Del Terzo, M.D. created this Life Tributes page to make it easy to share your memories.