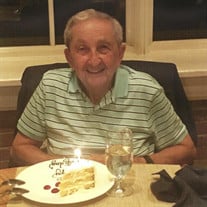 Michael Gleiberman, 93, of Lancaster, PA, died in his sleep on Sunday, August 30, 2020 at his home in Delray Beach, FL. Michael was born in Pinsk, Poland, which was later annexed as part of Belarus. He was the son of the late Baruch and Frieda Bakaltschuk Gleiberman. He was married to Carol Alboum Gleiberman for 56 years. As a child, Michael and his immediate family were deported from their home in Pinsk to Kazakhstan by the Soviet government. Weeks later, Pinsk was overrun by the Nazis and the remaining Jewish population there was eradicated. His family lived out the war exiled in Siberia, where he graduated valedictorian from a Russian high school. Following the war, Michael escaped to West Berlin with his older sister and lived in the Schlactensee Displaced Persons (DP) Camp. There he studied at the Technical Institute of Berlin, taught math in the camp, and ultimately was given the opportunity to come to America. In 1951, Michael arrived alone in the United States, sponsored by the Hebrew Immigrant Aid Society. His first job was as a factory worker in Milwaukee, WI, before he was drafted into the U.S. Marine Corps. Following his military service, he began his career in the hotel business in Wisconsin. Michael worked his way up in the industry, and eventually found himself managing the Chelsea Hotel on the boardwalk in Atlantic City, NJ. Because of his success there, he was recruited to open and manage the Host Town in Lancaster, PA. There, he met his wife, Carol, at the Host’s cabana club after being introduced by Carol’s mother. As his career advanced, Michael helped to develop two other Host properties along Route 30, the Host Farm and the Host Corral. These hotels were later sold to Westinghouse, and thereafter Michael purchased the Penn Ram Hotel. Once established, he renamed the hotel the Continental Inn, which he then ran for over 40 years before selling the hotel to Dutch Wonderland in 2018. As a Holocaust survivor, Michael considered it his duty to educate people about the Holocaust so the atrocities that happened during World War II would not be forgotten. Even into his early nineties, he made regular visits to local schools to share his story with students. Michael was a member of Temple Beth El and the Temple Beth El Men’s Club, the Lancaster Jewish Community Center, and B’nai Torah Congregation in Boca Raton, FL. Michael is survived by his beloved wife, Carol; his children, Susan Gold, wife of Andrew, Stamford, CT, Melissa Teller, Los Angeles, CA, and Rodney Gleiberman, husband of Alyson, Lancaster, PA; and 5 grandchildren, Sarah, Will, and Charlotte Gold, and Annie and Cassidy Gleiberman; and his brother, Manny Gleiberman, Los Angeles, CA. He was preceded in death by his sisters, Hinda Koenigsberg and Cypora Biegun. A private family service will be held on Tuesday, September 1, 2020 at Temple Beth El with interment to follow in the Temple Beth El Cemetery, Lititz, PA. The family wishes to include everyone and will make available a live webcast of the service starting at 1:30 p.m. that can be found at https://client.tribucast.com/tcid/49885246 In lieu of flowers, memorial contributions may be made in Michael’s name to Temple Beth El, 1836 Rohrerstown Road, Lancaster, PA 17601 or Friends of the Israeli Defense Forces (FIDF).

Michael Gleiberman, 93, of Lancaster, PA, died in his sleep on Sunday, August 30, 2020 at his home in Delray Beach, FL. Michael was born in Pinsk, Poland, which was later annexed as part of Belarus. He was the son of the late Baruch and Frieda... View Obituary & Service Information

The family of Michael Gleiberman created this Life Tributes page to make it easy to share your memories.

Michael Gleiberman, 93, of Lancaster, PA, died in his sleep on...

Send flowers to the Gleiberman family.