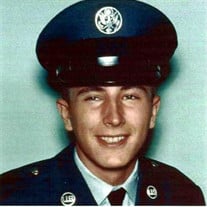 Michael Andrew Oniffrey, Jr., 76, of Lancaster, PA, passed away peacefully on Saturday, February 13, 2021, with his wife, Mell Jayne, by his side. Born in Mahanoy City, PA, he was the husband of Mell Jayne Youngblood Oniffrey, and they celebrated their 53rd wedding anniversary on March 25th. He was the son of the late Michael A. Oniffrey, Sr., and Rose Lowatti Oniffrey. Michael proudly served his country with the United States Airforce and worked as a Fuel Specialist. He enjoyed various positions after his time in the service, working with RCA, Firestone, the former Barlain Printing, and retiring from Lawn Equipment Parts. He was of the Lutheran faith. He was a member of the American Legion, the VFW Post 1463, Lititz and the VFW Post 7294, Millersville, PA, and a Life Member of Green Hill Sportsmen’s Association. He had a passion for any type of dog, and enjoyed fishing, hunting, being outdoors, and being with friends and family. He is lovingly survived by his wife, Mell Jayne, and cousins, John and Josie Honus, Matthew Honus, Carol and Joe Kalista and their family, and second cousin, John Honus. Friends like family also include Anne and Richard Clinton and their family. A Gathering of Friends will be held at The Groff’s Family Funeral Home & Cremation Services, Inc., 528 West Orange St. (corner of W. Orange and Pine Streets), Lancaster, PA 17603 on Thursday, February 18, 2021 from 5:00 – 8:00 P.M. In lieu of flowers, memorial contributions may be sent to the American Cancer Society, 314 Good Drive, Lancaster, PA 17603 or a charity of your choice. The family would like to thank the Oncology and Immunology departments, the Doctor’s and Nurses of Penn State Health, and the staff at Hospice and Community Care for their compassion in Michael’s care.

Michael Andrew Oniffrey, Jr., 76, of Lancaster, PA, passed away peacefully on Saturday, February 13, 2021, with his wife, Mell Jayne, by his side. Born in Mahanoy City, PA, he was the husband of Mell Jayne Youngblood Oniffrey, and they celebrated... View Obituary & Service Information

The family of Michael Andrew Oniffrey Jr. created this Life Tributes page to make it easy to share your memories.

Send flowers to the Oniffrey family.