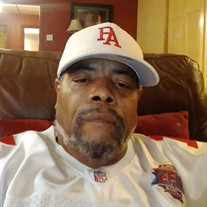 “Say What You Mean, Mean What You Say” Michael A. Porter Michael A. Porter, 61, of Lancaster, PA passed away on Friday, August 13, 2021. Born in Brooklyn, NY, he was the son of the late Donald and Ethel Porter. Michael was the “Don” of the party, the “King” of hosting Fourth of July events, backyard barbecues, and holiday gatherings. He loved his cigars and was a free-spirited heart in making sure all around him had a great time and felt at home. Michael worked at Costco for 21 years. It was his home away from home. There he made a lot of friends consisting of co-workers and customers. He greeted the customers with a huge smile and small meaningful conversations. The children, some called him Mr. Mike, loved when he made cartoon pictures on the receipts or was thrilled to get their hands stamped. Michael always challenged his friends and co-workers in conversation about sports, politics and/or life. Some of these conversations were usually escalated. If he was wrong or right…at the end of the conversation or debate you would leave shaking your head because HE BELIEVED HE WAS ALWAYS RIGHT!!! He is survived by his spouse, Judy Rowe of Lancaster, PA; his three daughters, Ebony N. Dukes (Christopher) of Lancaster, PA, Kimberly Brown of Far Rockaway, NY, and Rhonda Hernandez (Ricardo) of Lancaster, PA; his son, Terrell J. Rowe of Lancaster, PA and more of a son than nephew, Fredrick Porter aka “Frenchie” of Lancaster, PA, grandsons, Richardo Hernandez, RaShawn Hernandez, William Sharp, Terrell J Rowe, Jr., and Christopher L. Dukes. Granddaughters, Shanice M. Hernandez, Kayla L. Miller, Asante Swain and Ciana L. Dukes aka “Cici”, great-grandchildren, Bryson M. Hernandez and Brooke Swain. Also surviving his brother, Donald Porter aka “Jackie” of Poughkeepsie, NY, his sisters, Stephanie Brown of Queens, NY, Rachel Hickenbottom of Wilks Barre, PA, Shelia Porter of Queens, NY, Doreen Wiggins of Lancaster, PA, Arlene Porter of Poughkeepsie, NY, and Nicole Denis of Charlotte, NC. A host of nephews, nieces, great nephews, great nieces, and special acknowledgement of “THE POSSE”. Michael was preceded in death by his brother-in-law, Shawn Denis and son-in-law, Kelvin L. Brown. A Celebration of Michael’s life will be held on Thursday, August 19, 2021 at Ebenezer Baptist Church, 701 N. Lime Street, Lancaster, PA 17602 at 11:00 a.m. The visitation hour will begin at 9:30 a.m. until the time of service. Burial will be private.

“Say What You Mean, Mean What You Say” Michael A. Porter

Send flowers to the Porter family.