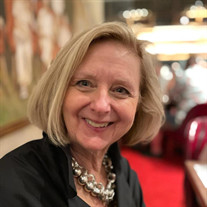 It is with profound sadness that we share the unexpected passing of Miriam “Mim” Enck, 75 of Mount Gretna, on Saturday, August 14, 2021 , at Lancaster General Hospital following a very brief illness. Born in Willow Street, PA, Mim was the daughter of the late Frank & Betty Enck. Her husband, Walter Progner, preceded her in death along with her brother, Jesse Enck. Mim is survived by her sisters, Ann Shertzer and Mary Reitz, and a brother, Daniel Enck, along with her nieces/nephews & grand nephews who had a special relationship with “Auntie.” Mim had a “je ne sais quoi” about her. To her friends around the world, of whom there were many, Mim was a particular favorite. Her professional background is very storied. She studied under Julia Child, television’s French Chef, Diana Kennedy, whose book The Cuisines of Mexico started changing how Americans view Mexican cooking, and Marcella Hazan, who was considered by chefs and fellow food writers to be the doyenne of Italian cuisine. These chefs were not only teachers, but personal friends, too. Mim loved to entertain. Whether it was a casual brunch or dinner, not only was the food amazing and memorable, but it was a special presentation involving crystal, china, and linens, along with a good bottle of wine. Although she has lived in Mount Gretna for many years, her home in Santa Fe was a special place that gave her a chance to recharge. She loved the beautiful sunsets and opera performances at the famous Santa Fe Opera House. Following her marriage to Walter Progner, entrepreneur and founder of the East Indies Coffee & Tea Company, Mim became devoted to studying the fascinating world of coffee and tea. Walter and Mim traveled throughout the world to coffee bean growing regions and various Far East countries to select tea. Mim was one of the world’s leading and most passionate authorities on tea, from brewing, serving, and enjoying it, to the delightful art of cooking with tea. Mim continued to run this thriving business after Walter’s passing, serving customers throughout the country, enriched by strong personal relationships with their many customers and friends. Funeral services will be private. If desired, memorial contributions may be made in Mim’s name to Black Rock Retreat, 1345 Kirkwood Pike, Quarryville, PA 17566. This organization was founded in 1954 by Mim’s father, Frank Enck.

It is with profound sadness that we share the unexpected passing of Miriam &#8220;Mim&#8221; Enck, 75 of Mount Gretna, on Saturday, August 14, 2021 , at Lancaster General Hospital following a very brief illness. Born in Willow Street, PA, Mim... View Obituary & Service Information

The family of Miriam "Mim" Enck created this Life Tributes page to make it easy to share your memories.

It is with profound sadness that we share the unexpected passing...

Send flowers to the Enck family.