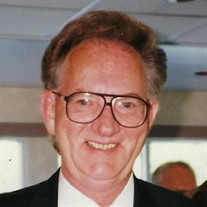 Morris E. (Mike) Krape Jr., 82, of Lancaster, died at home on Saturday, February 20, 2021. Born in Altoona, PA, he was the son of the late Morris E. Krape Sr. and Margaret (Soccey) Krape. He is survived by his partner, William Rhoads for 59 years, the brother to Nancy Love, godfather to Zak Drescher and many nieces and nephews. Mike retired from the School District of Lancaster in 1996. At the time of his retirement, he was Program Coordinator for Communication Arts. Previous to that position, he had been an English/Speech/Theater teacher, Director of Dramatic Arts, and English Department Chair at McCaskey High School and later District Supervisor of Secondary English. He was a graduate of Indiana University of Pennsylvania and Temple University. During his career, he served on various committees and task forces for the Pennsylvania Department of Education including those on Teacher Preparation and Certification, Writing Skills, Right to Read, Honors Studies, and Migrant Education. Additionally, he served as curriculum consultant to school districts and colleges throughout central Pennsylvania. A co-founder of the Lancaster-Lebanon Writing Council, he was on its Board of Directors, served a term as President, and was twice conference chair. He was one of the early leaders in teacher training in writing process. For a number of years he was a familiar presence at the Fulton Opera House, appearing in productions for the Kiwanis Club and for the Actors’ Company of Pennsylvania including Harvey, Picnic, Inherit the Wind, The Diary of Anne Frank, Fiddler on the Roof, Damn Yankees, The Roar of the Greasepoint/The Smell of the Crowd, and The Royal Family. He was co-founder of the Actors’ Company High School Theatre Festival and served as festival coordinator for nearly two decades. A private Celebration of Life service will be held at The Groff Family Funeral Home, 528 West Orange Street, Lancaster, PA with Pastor Jonette Gay officiating. The interment will be held at Highland Presbyterian Church Memorial Garden. In lieu of flowers, donations in Mike’s name may be made to McCaskey Alumni Association, 445 N. Reservoir Street, Lancaster, PA 17602 or The Music Department of either Highland Presbyterian Church 500 E. Roseville Road, Lancaster, PA 17601, or Otterbein United Methodist Church, 20 E. Clay Street, Lancaster, PA 17602.

Morris E. (Mike) Krape Jr., 82, of Lancaster, died at home on Saturday, February 20, 2021. Born in Altoona, PA, he was the son of the late Morris E. Krape Sr. and Margaret (Soccey) Krape. He is survived by his partner, William Rhoads for 59... View Obituary & Service Information

The family of Morris E. Krape created this Life Tributes page to make it easy to share your memories.

Send flowers to the Krape family.