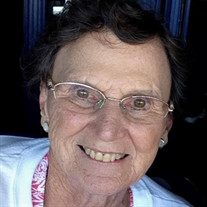 Born Nancy Gail Bingman, then a Good, and lastly, a Buffenmyer has passed from death into Life. Nancy was a daughter, sister, granddaughter, niece, cousin, aunt, friend, coworker, a mother, mother-in-law, grandmother, and great-grandmother. Most importantly she was a follower of Jesus Christ, and where in John 14:6 “Jesus said to him, “I am the way, and the truth, and the life. No one comes to the Father except through me.” She believed this absolute truth. So, as a young person, she placed her faith in those words. Because she also believed: John 3:16 “For God so loved the world, that He gave His only Son, that whoever believes in Him should not perish but have eternal life.” And Romans 10:13 “For “everyone who calls on the name of the Lord will be saved.” And there was a need for that belief because as is stated in Romans 3:23-25 “for all have sinned and fall short of the glory of God, and are justified by his grace as a gift, through the redemption that is in Christ Jesus, whom God put forward as a propitiation by his blood, to be received by faith.” These are the important lessons of life that allowed her boys to her great-grandchildren to come to know this truth also. And for this we are and will be forever grateful Mom, even if we were the “worst kids on the block”. How far from the truth that turned out to be, right John? And as we both know, that was only by the grace of God. (Moving to Lancaster County might have helped too.) Nancy was born in 1938, in Ardmore, Pennsylvania, the daughter of the late William E. Bingman and Barbara Hargraves Bingman, a sister to William and Robert Bingman of Lakeland and the Villages, FL. She was the wife of the late John N. Good, of Hickman, DE and later the wife of Melvin Buffenmyer of Leola, PA who also preceded her in death. Nancy had two sons, John A. Good husband of Wendy Siomko, now of Myrtle Beach SC and their two boys, Joshua Good, husband of Melissa and their daughter, Aurelia of AK and Adam Good of NJ. And her other, son, Mark A. Good, husband of Michelle Romascavage of Ephrata, PA and their two children Jennifer, wife of Anthony DeSanto, and her children, Hannah and Lily Tyer (who share their birthday with their great-grandmother) and Emma Liberty of FL and Mark Good of SC and his son, Mark Jeffery of NJ. For those of you who like stats, that was 2 brothers, 2 husbands, 2 sons, 4 grandchildren, and 5 great-grandchildren, also, a sister-in-law to her brothers’ wives and husband John’s brothers and their wives, and an aunt to 9 nieces and 5 nephews. Nancy attended school at Sharon Hill in Delaware County PA and the last 2 years of high school at Ben Lippen in SC where she made lifelong friends. Years later, she proudly finished at F&M in Lancaster PA with an associate’s degree. Nancy spent much of her life in Delaware and Lancaster Counties in Pennsylvania but also lived in Washington, DC as a child. She moved to Barstow, California after marriage to John who was stationed there for his military service, before moving back to Delaware County. Living in Collingdale, Prospect Park and Norwood, attending Collingdale Baptist Church before moving to Lancaster County in 1972 with her husband, John and their family to Clay, then Brunnerville, attending Ephrata Bible Fellowship Church then they moved to Warwick Township, and she alone moved to Adamstown, attending Calvary Independent Church and after her marriage to Melvin, she moved to Leola and attended Conestoga Church of the Brethren serving as a Deacon. (Thanks Evie). She visited her extended family in Florida throughout her lifetime and wintered in Florida in an RV with Melvin and after his death, lived in Fort Myers, FL. (Mom could not get enough of the beach) until her illness required family support where she then lived with her son, Mark and Michelle who went above and beyond as a daughter-in-law as her caretaker in Ephrata for the past 5 and a half years until her death. Thank you to the caring staff of Hospice & Community Care. Nancy worked as a secretary and bookkeeper and church receptionist with several companies, American Life of Philadelphia, Scott Paper in Essington, and for the Slushners in Prospect Park, Dutchland Labs in Denver (hey Vivie), Moyers of Ephrata that became Gerber, Keller Brothers Ford in Lititz and finished as a church receptionist. Nancy will be missed, and her life was spent, as is most of ours, with trials and love, but mostly by faith and hope in the Lord Jesus Christ. She would want you to understand 1 Thessalonians 4:13-14 “But we do not want you to be uninformed, brothers, about those who are asleep, that you may not grieve as others do who have no hope. For since we believe that Jesus died and rose again, even so, through Jesus, God will bring with him those who have fallen asleep.” Enjoy being with Jesus, Mom, until we meet again, your grateful family. At Nancy’s request, there will be no service. Her interment will be at Bareville Union Cemetery on Brethren Church Road in Leola, PA. So, please remember her in a way that is best suited for you and your relationship with her. If you don’t know Jesus personally yet, please seek Him, then you and Nancy can celebrate together in Eternity.

Born Nancy Gail Bingman, then a Good, and lastly, a Buffenmyer has passed from death into Life. Nancy was a daughter, sister, granddaughter, niece, cousin, aunt, friend, coworker, a mother, mother-in-law, grandmother, and great-grandmother. Most... View Obituary & Service Information

The family of Nancy G. Buffenmyer created this Life Tributes page to make it easy to share your memories.

Born Nancy Gail Bingman, then a Good, and lastly, a Buffenmyer...

Send flowers to the Buffenmyer family.