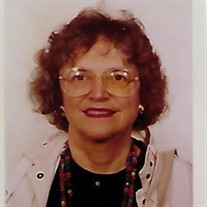 Nancy Long Gingrich, 89, formerly of East Petersburg, PA, died peacefully at United Zion Retirement Community on Monday, January 3, 2022. Mrs. Gingrich was the daughter of the late Henry Keiper and Helen Hamaker Long of Lancaster, PA. She was the granddaughter of Charles B. and Nancy Keiper Long and Dr. William B. and Belle Hamaker. She was the widow of Bruce F. Gingrich who died in 1993. Mrs. Gingrich graduated from Greenwood School, Ruxton, Maryland, and Stephens College, Columbia, Missouri in 1952, where she majored in Equine Management. She also attended the Agriculture College of the University of Missouri. For many years, she owned and showed American Saddle Horses. She was on the Board of Directors of the Lancaster Riding Club and taught riding lessons. When the Historic Preservation Trust was first established in Lancaster, she was the secretary for 10 years and was among the group that was instrumental in saving the Ellicott House from demolition. Mr. and Mrs. Gingrich enjoyed collecting antiques and many times had their historical home open for both house and garden tours. They took great interest in their perennial gardens and loved to share them with whomever came around. She was a Master Gardener for twenty years and President of Canassatego Questers. Mrs. Gingrich was a past member of the Lancaster Country Club, the Hamilton Club, and a member and supporter of the Junior League. For many years, she was a member of the Board of Directors for the Rock Ford Plantation and was President of the board in 1994. Mrs. Gingrich’s father, Henry K. Long, was the founder of the Strasburg Railroad. She continued her father’s legacy by being involved with the Railroad and served as Vice President for several years. She was an active member and supporter of Colonial Dames, Daughters of the American Revolution, and Daughters of the American Colonies and Daughters of 1812. She also was a long-time volunteer at East Petersburg North Elections. Mrs. Gingrich is survived by four children, Charles F. (Jodi) Gingrich of Lewisberry, PA, Bruce F. (Susan) Gingrich, Jr. of Hamilton, MA, and S. Nissley Gingrich (Lisa Kanick) of Wilmington, DE, and daughter Katie L. (Darin) Tucholke of Minturn, CO; five grandchildren, two step-grandchildren, two great-grandchildren, and a brother, Stephen H. Long of California. She was preceded in death by her husband, Bruce F. Gingrich and brother, Henry K. Long, Jr. of Camp Hill, PA. Private services will be held at the convenience of the family.

The family of Nancy Long Gingrich created this Life Tributes page to make it easy to share your memories.

Send flowers to the Gingrich family.