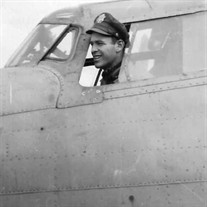 Newton Dana passed away on Tuesday, April 13, 2021 at St. Anne’s Retirement Community, Columbia, PA. Newton was born in Trenton, New Jersey and was the son of Jacob and Mamie Dana, both Polish immigrants. Newton graduated from Trenton Central High school and earned a Bachelor’s degree in Animal Husbandry from Ohio State University. He interrupted his college training to serve in the Army Air Corps, where after completing flight training, he was assigned to the 374th Squadron, 308th Bombardment Group of the 14th Air Force, “Flying Tigers”. Serving with the flight crew of the Nationally recognized, “Manhattan Maiden B-24 Liberator,” Newton co-piloted the 10 person crew on 42 harrowing bombing and transport missions in the China-Burma-India theater; including the bombing of the famous Yellow River Bridge and other strategic sites. Newton was awarded the Distinguished Flying Cross and numerous other medals; his plane went down in Burma where he and the crew survived almost a month in the jungle. He was 100% Service connected disabled veteran and was the last survivor of his flight crew. Newton began his career working for his father on the family farm and also for the Trenton Meat Packing Company started by his father and uncle. He later worked as an institutional food broker covering Pennsylvania and surrounding states specializing in school feeding programs, he was highly respected in the food industry. A major highlight of his life in addition to being proud of his family was talking about his relatives. The Bielski partisans who saved over a thousand people in Northwest Poland during WW2. He was immensely proud of the fact that his family succeeded in saving many people even though many of his other relatives perished at the hands of the Nazi’s. He was preceded in death by his wife of over 60 years, Louise Byer Dana and his parents. He is survived by his brother, Irvin Dana of Albany, New York, five children: Donna Jackson (Bill), Toni Levinson (Gary), Robin Dana (Allen), Neal Dana (Amy), and Andrea Dana McCullough (Warren), eleven grandchildren and nine great-grandchildren. A Graveside Service will be held at Greenwood Cemetery, 1800 Hamilton Avenue, Hamilton Township, New Jersey, 08619 on Thursday, April 15, 2021 at 2:00 p.m. The family wishes to thank the entire staff of St. Anne’s Retirement Community for the compassionate care that they provided. Donations in Newton’s memory may be made to St. Anne’s Retirement Community, 3952 Columbia Avenue, Columbia, PA 17512 and/or the National Museum of the US Air Force, 1100 Spaatz Street, Wright-Patterson AFB, Ohio, 45433.

The family of Newton Dana created this Life Tributes page to make it easy to share your memories.

Send flowers to the Dana family.