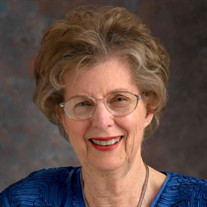 Norma Jean Huss, 91, of Willow Street, Pa., passed away Tuesday, April 27, 2021 at the Willow Valley Communities healthcare facility, after an illness. Born in Missouri, Norma moved with her family at age five to the state of Washington. She grew up on her family’s farm near Acme and graduated from Mount Baker High School in 1948. As a young woman, Norma attended the secretarial school at Central Washington College. She secured gainful employment as a secretary in the Contracts division for Scraps and Disposals at Boeing Airplane Company. There, her most interesting assignment was to take notes for the meetings between Boeing executives and the Air Force to plan the disposal of the tooling for the discontinued legendary World War II era bomber, the B29 Superfortress. While living in Seattle, Norma met her husband Dick, whose Navy ship was periodically stationed nearby. They were married in September 1955 at the chapel in Valley Forge, Pa. and settled in Lancaster. They raised five children together. Dick was owner and CEO of Graphic Crafts, Inc. in Willow Street. During the child-rearing years, Norma sewed much of the clothing her children wore to grade school. She often played the piano and led family sing-alongs of hits from the 1950s and ’60s. Any family camping vacation that involved driving to another state would invariably prompt Norma to sing a song that featured the name of that state. Norma served as President of the Willow Street Women’s Club. She was also a docent for the North Museum in Lancaster where she was trained to describe exhibits to school children on “plants and birds and rocks” (and things). As empty-nesters, Norma and Dick spent time boating on the Chesapeake Bay. They took regular boat trips on the Intercoastal Waterway and made many new friends. They also enjoyed travels to Antarctica, the Galapagos Islands, the British Isles, and other destinations around the world. At home, Norma threw herself into a passion for writing cozy mysteries. She was a member of Penn Writers, Sisters in Crime, and the Willow Valley Communities’ Writer’s Group. She expanded into blog writing for her own website where she adopted the nickname, “The Grandma Moses of Mystery.” The original Grandma Moses was about 80 years old when she had the first big showing of her folk art. Similarly, Norma’s first mystery, “Yesterday’s Body,” was published just before she turned 80. By age 90 she had published several more mysteries and a book of ten short stories. She also wrote a non-fiction retelling of her father’s true-life adventures in 1920’s Alaska. Norma displayed a life-long spirit of adventure and creativity. She was known for her even keel temperament and good sense of humor. She will be remembered as a loving wife, mother, grandmother, and great-grandmother who took life’s challenges in stride. She is survived by her sister Pauline Caraker (husband Gene); four daughters, Diane Bock (husband Kerry), Donna Hedricks, Patricia Traynor, and Sharon Roat; her son, Robert Huss (wife Cindi); her grandchildren Matthew Traynor (wife Courtney), Eric Traynor, Grant Hedricks (wife Hannah), Leah Lucas (husband Garrett), Linore Huss, Jana Huss, Sebastian Roat, and Anna Roat; and her great-grandchildren Maisy, Theodore, Miles, and Avery Traynor. Preceding her in death were her husband of 64 years, Richard Huss Jr., her parents William and Dorothy Collins, her brother Bill Collins, and her son-in-law, Rich Roat. A private burial event will be scheduled in the future.

Norma Jean Huss, 91, of Willow Street, Pa., passed away Tuesday, April 27, 2021 at the Willow Valley Communities healthcare facility, after an illness. Born in Missouri, Norma moved with her family at age five to the state of Washington. She... View Obituary & Service Information

The family of Norma Jean Huss created this Life Tributes page to make it easy to share your memories.

Send flowers to the Huss family.