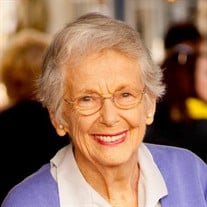 Patricia Kling Burnley, 92, entered into eternal rest on February 19, 2021 of natural causes. Born in Lancaster, she leaves behind a legacy of love, entrepreneurship and joy for millions of people who loved Lancaster County and came to Kitchen Kettle Village over and over again to celebrate what it represents. Family meant everything to Pat. She grew up with her two sisters, Betty Smith and Martha Weaver, in Intercourse, PA helping her father Victor Kling in his auctioneering and insurance business. She and her mother Anna High Kling tended to their gardens and home. Being the third of three girls, she always said “my father wanted a boy so he just raised me like one.” In the 1930’s that meant she clerked the sales where her father was the auctioneer, paid the bills and greeted the insurance clients in his home office and received her Associates degree from Drexel College after high school. She met Robert Clarence Burnley at Drexel, where the two of them were attending school. Bob was an Army Sergeant in World War II and always wanted a business of his own. So in 1954, he bought a jelly business in Mechanicsburg and moved the recipes and kettles to his garage in Intercourse. He worked three jobs in addition to setting up the business to make sure he could support his wife and three children until Kitchen Kettle was established. Pat was an equal partner and did her part to make sure the business could survive. Little did they know those combined efforts, which their friend from New Holland dubbed Kitchen Kettle Foods, would spark a business and life’s work for them and the next two generations. This would inspire countless other entrepreneurs and allow millions of people from all over the world to take part in the simple way of life Lancastrians treasure. Pat also loved to travel, especially with her two sisters, Betty Smith and Martha Weaver, and a cousin, Anne Lockey. The Kling sisters were a formidable trio who built their own legacy of family, cousins and true connection for generations to come. They regularly visited college campuses, museums, churches, and faraway cities with Road Scholar travel company. She also loved to learn so these trips and her business allowed her to explore, wonder and participate in new experiences– a trait that marked the spirit of Kitchen Kettle. Pat’s faith was very important to her. She sang in the choir and was a soloist at St. Stephen Reformed Church in New Holland while she and Bob were raising their family. They also taught Sunday School to teenagers, and in true fashion, many of those classes were hosted at their family home after church so she could in another form display her true devotion to good hospitality. Later, she would serve on the Parish Resource Board in Lancaster County because she believed in God’s watchful eye on her world. She sang in the choir and was a Stephen Minister at Highland Presbyterian Church for many years. Pat served as President of Philanthropic Educational Organization (PEO) and was with American Cancer Society as a volunteer for Road to Recovery. Pat was a poet and a writer of sorts. When her days of constant leadership and working at Kitchen Kettle were being transferred to the second generation of the business she relished the role of Grammy. At each of her six grandchildren’s successful end of higher education, she composed a thick scrapbook of memories from their journey to that pinnacle. There were stories she remembered, letters she had collected, poems to inspire and advice from their cousins, aunts and uncles and from Grammy herself. Pat was always creating something new while challenging her mind to stay busy and find ways to make others happy. Of all things Pat was courageous and trusted in God’s faithfulness. She took on challenges; believed they would work out and then set out to make sure they did. In 2007, Pat was awarded the inaugural Lifetime Achievement Award by Discover Lancaster, the award has since been renamed the Burnley Lifetime Achievement Award. In addition, she received the Woman of Influence Lifetime Achievement Award from the Central Penn Business Journal. After Bob Burnley died and the second generation had firmly established themselves at Kitchen Kettle Village, Pat dove into the role of Grammy while pursuing her other interests. At the age of 87, she met and married Charlie Coon. The two of them found love, joy, and friends in their life together. Rather than building a business and traveling the world, they enjoyed the comfort and caretaking of each other and newfound friends. They transitioned to live at The Long Home by her church and finally settled at Garden Spot Village when more tender loving care was needed for her. Pat’s devotion to hard work, “sticktoitiveness,” creativity, family and hospitality will live on in the people who watched and were inspired by her unending energy and her graciousness. Her commitment and love for the many Kitchen Kettle employees over her entire career was unmatched. Her children Michael and Carol Burnley, Jim and Peggy Burnley, Joanne Burnley Ladley and Joe Byorick are grateful for her life, love, and legacy. Her grandchildren, Michelle and Joe Rondinelli , Mark Burnley, Allyson Ladley Gibson and Ryan Gibson, Scott Ladley and Heidi Ludwick, JR Burnley, Devon Burnley, Courtney Dougherty, and nine great grandchildren will continue to treasure the memories and be inspired by the life of Patricia Kling Burnley Coon – Grammy to us all. A private Celebration of Life Memorial service for Pat will be held at Highland Presbyterian Church with Rev. Dr. Roger Rabey officiating. The public is invited to join a broadcast on the Highland Presbyterian YouTube channel found at www.youtube.com/c/highlandpresbyterian beginning on Wednesday, March 10, 2021 beginning at 1 p.m. (this is a change of date). The interment will be held at Conestoga Memorial Park. In lieu of flowers, please consider a memorial contribution in Pat’s name to Highland Presbyterian Church, 500 E. Roseville Road, Lancaster, PA 17601.

Patricia Kling Burnley, 92, entered into eternal rest on February 19, 2021 of natural causes. Born in Lancaster, she leaves behind a legacy of love, entrepreneurship and joy for millions of people who loved Lancaster County and came to Kitchen... View Obituary & Service Information

The family of Patricia Kling Burnley created this Life Tributes page to make it easy to share your memories.

Send flowers to the Burnley family.