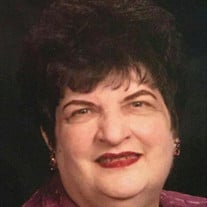 Patricia Anne Charles Gilmartin, 80, of Elizabethtown, PA, formerly of Marietta, died at home surrounded by her loved ones on Monday, January 4, 2021. Born in Marietta, she was the daughter of the late J. Edward Charles and Edith M. Charles. She was the loving wife of 56 years to Joseph J. Gilmartin, Jr. who died in 2018. Patricia graduated with honors from Donegal High School, attended Lebanon Valley College and was active politically. Since 1979 she was Director of Donegal Companies and Subsidiaries, until retiring in 2019, including: Donegal Group INC, Donegal Mutual Insurance Co, Southern Insurance Co, Atlantic States Insurance Co, and Vice President of Marietta Gravity Water Co. She was a licensed Insurance Agent, since 1983, of Associated Donegal Insurance Brokers, previously Office Manager for the J. Edward Charles Insurance Agencies, from 1971 to 1982, she was formerly employed by Armstrong World Industries in International Marketing. Patricia’s associations consisted of member and past Vice President of Columbia Woman’s Club, member and past President of Marietta Branch-Auxiliary to Columbia Hospital, past Committee Person for Troop #53, B.S.A, and past member of Woman’s Republican Club, Lancaster County. She was a member of Community Bible Church in Marietta and her interests included art, watercolor, as well as being an avid writer. Patricia is survived by her son, Joseph J. Gilmartin III (Tillo) of Elizabethtown, PA, her sister, Jill Charles Melkonian, her granddaughter, Victoria “Tori” Gilmartin, and her great-grandchild, Navey J. Elser. In addition to her parents, she is preceded in death by her husband of 56 years, Joseph J. Gilmartin, Jr, her son, J. Edward Charles Gilmartin, her grandson, Joseph J. “Joey” Gilmartin IV and her brother-in-law, Dodge G. Melkonian. A Funeral Service will be held for Patricia on Friday, January 8, 2021 at 1:00pm at Community Bible Church, 331 Anderson Ferry Road, Marietta, PA 17547 with Senior Pastor Jeff Burkholder officiating. A viewing will be held from 12:00pm until the time of service. Interment will immediately follow the service at Bainbridge Cemetery. Memorial contributions can be made in Patricia’s name to Community Bible Church of Marietta, PA.

Patricia Anne Charles Gilmartin, 80, of Elizabethtown, PA, formerly of Marietta, died at home surrounded by her loved ones on Monday, January 4, 2021. Born in Marietta, she was the daughter of the late J. Edward Charles and Edith M. Charles.... View Obituary & Service Information

The family of Patricia Anne Gilmartin created this Life Tributes page to make it easy to share your memories.

Send flowers to the Gilmartin family.