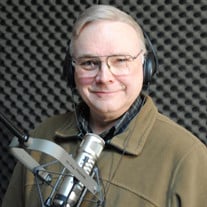 Paul Samuel Heil, 73, passed away at his residence on Sunday, December 27, 2020, following a heart attack. Born in Reading, PA, he was the son of the late Rev. David Paul and Virginia M. Gaul Heil. He was married to Shelia Kay Troyer Heil for 38 years. Paul graduated from McCaskey High School in 1965 and received his Bachelor of Arts degree from Elizabethtown College in 1969. During his college years, Paul created a college radio network serving a dozen college radio stations in Southeastern Pennsylvania. He worked as an award-winning news director at WGAL Radio from 1969-1977 and WGAL TV from 1977-1979. Paul, the founder of The Gospel Greats syndicated radio program, has been a fixture in Southern Gospel Music since 1980. It was the first Southern Gospel radio program accepted by the Armed Forces Radio network. He was a founder and nine-term President of the Southern Gospel Music Guild, served on the Southern Gospel Music Association Advisory Board and was a member of the Pennsylvania Southern Gospel Music Association. Paul started Springside Marketing, a Southern Gospel mail-order company that he managed for 34 years. At Rohrerstown Mennonite Church, he was in leadership and a lay preacher. He is a member of the Lancaster Church of the Nazarene where he preached four weeks ago. He enjoyed home renovation projects and walked regularly with his wife. During the program's 40 years, Paul was recognized as the best-known radio voice in Southern Gospel music and was awarded every radio broadcasting award possible in the genre. Paul's awards for this work include The Singing News Fan Awards from 1987 to 2005, the Marvin Norcross Award for lifetime accomplishment in 1991, the SGMG's “Hearts Aflame” award in 1997 and “The Paul Heil Award” was established in 2000. Paul was inducted into the Pennsylvania Southern Gospel Music Hall of Fame in 2003. For his lifetime work, he received the “James D. Vaughan Impact Award” in 2004 from the SGMA. SGNScoops Magazine presented their highest honor to Paul in 2007 for outstanding contributions and impact in the world of Southern Gospel Music. The Southern Gospel Music Guild presented Paul with their “Lifetime Achievement Award” in 2009. In 2014, Paul was inducted into the Southern Gospel Music Hall of Fame in Pigeon Forge, Tennessee. He is survived by his wife Shelia and his two sons: Jason D. Heil and Andrew T. Heil (Meredith Talbert), both of Lancaster, his brother, John T. Heil (Sue Fry), Strasburg, and a niece and nephew. Paul was a loving grandfather to his two grandchildren, Tahlia and Rhys Heil. A public viewing will take place at Lancaster Church of the Nazarene, 2150 New Holland Pike, Lancaster on Friday, January 1st, 2021 from 2-4 PM. A funeral service for Paul will be private for invited guests only. It will be livestreamed, at https://www.facebook.com/lancasternaz/ for all to view on Saturday, January 2nd, 2021 at 10:30 AM. Interment will take place at Conestoga Memorial Park. In lieu of flowers, memorial contributions can be made to Southern Gospel Music Association Hall of Fame and Museum, PO Box 6729, Sevierville, TN 37864-6729.

Paul Samuel Heil, 73, passed away at his residence on Sunday, December 27, 2020, following a heart attack. Born in Reading, PA, he was the son of the late Rev. David Paul and Virginia M. Gaul Heil. He was married to Shelia Kay Troyer Heil for... View Obituary & Service Information

The family of Paul Samuel Heil created this Life Tributes page to make it easy to share your memories.

Paul Samuel Heil, 73, passed away at his residence on Sunday,...

Send flowers to the Heil family.