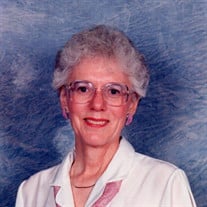 Phyllis Richardson, a retired librarian, passed away peacefully at her home in Lancaster, Pennsylvania on Monday, August 17th, 2020, aged 89. Born in New York to Louise and Philip Kallenberg, she graduated from Richmond Hill High School, earned a BS in Chemistry from Syracuse University, and an MS in Laboratory Science from Columbia. Phyllis later obtained a Professional Certificate in Library Science from Caldwell College. She was a Sister of Kappa Delta sorority. Her 65-year marriage to Alexander L. Richardson began in 1955. They raised their family in Livingston, New Jersey, where they were active leaders in the Federated Church of Livingston and she sang in the church choir. Phyllis was employed by the Livingston Public Library for many years, and was active in the American Association of University Women. She was also an active Girl Scout leader. In 2010 they moved to the Willow Valley community near Lancaster, where she continued to be active in the community, including serving on the library committee. Phyllis and Alex enjoyed travel to Europe and other overseas locations. Phyllis was an avid gardener, enjoyed crossword and many other puzzles, appreciated classical music and live theatre, and would play Scrabble (hardball) with her children on a regular basis. To her children she passed on an appreciation of fresh vegetables grown in your own garden, a killer cheesecake recipe, and a love of learning and creative pursuits. In addition to her husband, Phyllis is survived by her three children, Donald (Ramona), Dorna, and Kristen; two grandchildren, James (Christina) Richardson and Sarah (Edward) Hackman; and two great-grandsons, Adam and Ryan Richardson, in whom she took great delight. She also leaves 8 nieces and nephews and their families. In addition to her parents, she was predeceased by her older sister and brother-in-law, Wilma and Lloyd Wilson. Interment will be private at a later date. In lieu of flowers, Phyllis would have appreciated donations to Planned Parenthood or to your local library of choice

The family of Phyllis K. Richardson created this Life Tributes page to make it easy to share your memories.

Send flowers to the Richardson family.