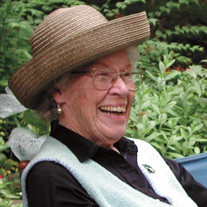 Polly Abel died on Sunday, April 24, 2022, at Calvary Homes. She was born on April 17, 1921, to Marion and Lloyd Whitaker, and lived most of her life in Lancaster. Polly was a piano teacher, a voracious reader of thrillers, a fierce Scrabble player, and a generous friend to all. She loved her garden, especially the birds. Polly was a life-long musician with an early focus on voice. In high school, she won the state competition as Solo Soprano. She was unable to attend the national competition, however, because she spoke as Valedictorian at Manheim Township High School graduation ceremonies on the same day. She attended The Juilliard School for voice and finished her musical education at the Philadelphia Conservatory of Music, majoring in piano. After college, Polly was active in Lancaster’s community theater and had leading roles in many comedies. It was there that she met the love of her life John Edward (Jed) Abel, Jr. They married in 1942 before he shipped out to the European Theater in WWII. They had three sons, Michael, Patrick, and Erik, who survive her. Polly was a radio pioneer. She worked at WGAL Radio in the early 1940s and was Lancaster’s first woman radio announcer. Working at WDAS in Philadelphia during WWII, Polly was the first woman station announcer and musical director on the East Coast. She also acted there in several radio plays. For 35 years Polly served on the board of the Lancaster County Association for the Blind (now VisionQuest). She volunteered at their Radio Talking Library, reading newspapers, magazines, and books on the association’s radio station. She saw the need for large-print calendars and spearheaded the project, recruiting local businesses to provide the funding, and local artists to provide the images. Polly had hundreds of piano students over the last 70 years of her life, sometimes teaching the parents as well as their children. Many of her students became life-long friends. Polly continued teaching up until her 101st birthday. Polly was loved by all. Her many friends will miss her bright smile, her quick wit, and her apple pies. In addition to her sons, Polly is mourned by her daughters-in-law Julie and Martha Abel; her granddaughters and their husbands Leanne and Michael Stanczak and Elspeth and Christopher Slater; and three great-grandsons Jonathan and Christopher Stanczak, and Augie Slater. Her husband, Jed, died in 1992. Family and friends are invited to share conversations and memories of Polly during an informal gathering that will take place on Saturday, May 21, 2022 from 2:00 p.m. to 4:00 p.m. at The Groffs Family Funeral Home, 528 W. Orange Street, Lancaster, PA. Interment will be private. Instead of flowers, Polly's family asks that memorial contributions be made to Calvary Homes, 502 Elizabeth Drive, Lancaster, PA 17601.

Polly Abel died on Sunday, April 24, 2022, at Calvary Homes. She was born on April 17, 1921, to Marion and Lloyd Whitaker, and lived most of her life in Lancaster. Polly was a piano teacher, a voracious reader of thrillers, a fierce Scrabble... View Obituary & Service Information

The family of Polly Whitaker Abel created this Life Tributes page to make it easy to share your memories.

Send flowers to the Abel family.