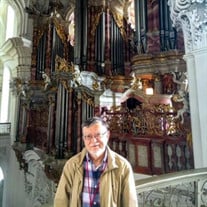 Raymond James Brunner, 71, of East Petersburg, PA, passed away on Tuesday, November 17, 2020 surrounded by his family and after a brief battle with cancer. Born in Lancaster, he was the son of the late Adolphus Jay and Ruth Glendora Gaskins Brunner. He was the husband of his beloved wife, Martha (Sweigart) Brunner, and the late Ruth E. (Rissmiller) Brunner who passed away in November 2003. Raymond received his Bachelor of Science in Civil Engineering from Lehigh University in 1971. He worked for eight years with PennDot as a Civil Engineer in the Research and Development Department, where he earned his P.E., Professional Engineer. He went on to continue his lifelong career in Pipe Organ building where he was able to share his passion for fine woodworking and musical instruments. In 1981, Ray started his own Pipe Organ business, R.J. Brunner & Company (now Brunner & Associates, LLC), where he restored some of the world’s finest Pipe Organs. He was a member of the American Institute of Organ Builders and the Organ Historical Society. In 1990, Raymond became a published author of “That Ingenious Business,” which highlighted Pennsylvania German Organs and Organ Builders. Ray attended Holy Spirit Lutheran Church for 35 years. He enjoyed classic cars, trains, and was a member of the Studebaker Driver’s Club of America, and the Studebaker Drivers Club-Keystone Region. Reading was a true passion of his as he enjoyed early American history and genealogy. His grandmother, the late Hattie Klapp Brunner, an antique dealer and Folk-Art painter based in Reinholds, PA, influenced Ray for his love of antiques, while Ray influenced Hattie to start painting in the late 1950’s. During his retirement, Ray could be found on his family’s island along the Susquehanna River where he enjoyed boating, camping, and swimming with his family. Along with his wife, Martha, he enjoyed traveling the world. Raymond is survived by his loving wife, Martha, his children: Owen J. Brunner (Jaimie) of Bel Air, MD; Amy E. Moore (Jeffrey) of Columbia, PA, and Amelia R. Brunner (fiancé of Nicholas), Rochester, N.Y. Ray will be remembered for the kindness and love he shared with his wife, children, family and friends. He was preceded in death by his first wife, Ruth, the mother of his three children, and his brothers, William Knight and Lancelot Knight. A public memorial service will be planned for a later date with The Rev. Clifton D. Eshbach officiating. In lieu of flowers, memorial contributions may be made in Ray’s name to the Studebaker Drivers Club – Keystone Region. Checks can be mailed to the attention of Ronda White, 2706 Hoffer Street, Harrisburg, PA 17103.

Raymond James Brunner, 71, of East Petersburg, PA, passed away on Tuesday, November 17, 2020 surrounded by his family and after a brief battle with cancer. Born in Lancaster, he was the son of the late Adolphus Jay and Ruth Glendora Gaskins... View Obituary & Service Information

The family of Raymond James Brunner created this Life Tributes page to make it easy to share your memories.

Send flowers to the Brunner family.