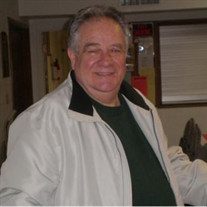 Richard Michael Gargano, “Rich”, 80, of Lancaster, PA, passed away on Friday, November 26, 2021. Born in Brooklyn, NY, he was the son of the late Francesco and Carmella (DeSanto) Gargano and his late stepmother, Marion V. Arrigo. He came to Lancaster in 1954 after attending LCHS he was given the nickname “Brooklyn”; all that came to know him, knew him as Brooklyn. After serving in the Army, he started Gargano’s Pizza on Redwood Drive in 1967 and later Gargano’s Rathskeller bar, night club, and restaurant on East Lincoln Highway. Rich also had locations in Marietta and East Petersburg. In addition to his success with several pizza restaurants, later in life he managed Regal Theaters in both Lancaster and York, as well as the Deli Departments in both Lancaster and Ephrata Walmart Superstores. As an avid coin collector, Rich was a member of the Lancaster Coin Collector Club. He was a model train enthusiast; he was a member of the Lancaster Model Railroad Club. Rich and Gloria enjoyed many years of antiquing. They acquired an extensive antique collection of clocks, stone wear, trains, coins, Delpt ware, and Quimper. He loved his Italian heritage and family, he often shared stories of his childhood making pasta with his beloved grandmother and growing up in Brooklyn. He had a passion for cooking Italian food. He is survived by his wife, Gloria A. Gargano of 31 years of marriage. Also surviving are his two daughters, Regina Fronina of Lancaster, Michelle Gargano of Mountville; his two stepsons, Michael Kilgour of York and Patrick Kilgour (Maureen) of Millersville; his three grandchildren, four step grandchildren and four great-grandchildren; his brother, Joe Gargano (Melanie) of Columbia; sister-in-law, Dawn Melito (John Gitto) of Myrtle Beach, SC; and a host of nieces, nephews, grandnieces, and grandnephew. He was preceded in death by his sister, Camille Gargano. A Memorial Service will be held at The Groffs Family Funeral Home, 528 W. Orange Street, Lancaster on Friday, December 3, 2021 at 11:00 a.m. Friends are welcome to greet the family at 10:00 a.m. until the time of service. Interment will immediately follow at St. Joseph’s New Catholic Cemetery, Bausman, PA. In lieu of flowers, please make donations to the American Cancer Society, 314 Good Drive, Lancaster, PA 17603.

Richard Michael Gargano, &#8220;Rich&#8221;, 80, of Lancaster, PA, passed away on Friday, November 26, 2021. Born in Brooklyn, NY, he was the son of the late Francesco and Carmella (DeSanto) Gargano and his late stepmother, Marion V. Arrigo.... View Obituary & Service Information

The family of Richard Michael Gargano created this Life Tributes page to make it easy to share your memories.

Send flowers to the Gargano family.