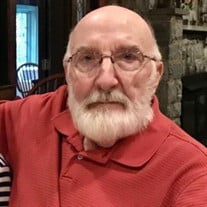 Richard E. “Pud” Nagley, 86, of Willow Street, PA, passed away on Sunday, February 14, 2021 at his home. Born in Lancaster, he was the son of the late John and Vinnie (Smith) Nagley. Dick celebrated his 60th wedding anniversary to Mary Ann (Resch) Nagley in July. He worked for the former Cortney and Todd ESSO Station in Willow Street which became Todd ESSO Station, Brenneman Transmission in Willow Street, Armstrong World Industries in the garage where he retired after 20 years of service. After retiring, he worked part-time for Clyde Stumpf & Sons, and the Willow Street Car Wash. He was an avid NASCAR fan and enjoyed going to public sales and auctions. Dick served in the US Army from 1957-1959. He attended West Lampeter High School and received his GED in 1968. In addition to his wife, Mary Ann he is survived by his children, Linda A. Hess (Tim Gehman) of Lancaster, PA and Keith A. Nagley (Tracey) of York, PA; his grandchildren, Lauren (Bryan Malak), and Abby; his step-grandchildren, T.J. and Tennison; his great-grandchildren, Leah and Rylan. Preceding him in death were his siblings, Arthur, Robert, Donald, Daniel, and Arlene. Friends are invited to a visitation with the family on Friday, February 26, 2021 from 5-7:00 P.M. at The Groffs Family Funeral Home, 528 W. Orange Street, Lancaster PA (corner of W. Orange & Pine Sts.). A Private Service will be at the convenience of the family. Contributions in his name can be made to Hospice & Community Care, 685 Good Drive, Lancaster, PA 17603.

The family of Richard E. "Pud" Nagley created this Life Tributes page to make it easy to share your memories.

Send flowers to the Nagley family.