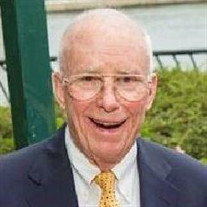 Richard G. Woolworth, "Dick," passed away peacefully on Saturday, March 6, 2021 surrounded by many family members in Hobe Sound, Florida. Dick's gifts of hospitality, gratitude, and service to others changed the lives of family, friends, and colleagues during his 91 years. No one left a conversation with him without feeling appreciated and encouraged; he generously offered kind words and smiles to everyone he knew or met. He was also generous in giving putts in his beloved game of golf, which he continued to play until a few weeks prior to his passing. Dick was well known for pulling out his ukulele, often harmonizing with Helen, his wife of over 70 years. Born November 1, 1929, Dick and his older sister, Sylvia, grew up in Lancaster, PA with their parents, May Gorton Woolworth and Chester M. Woolworth. A graduate of Lawrenceville School and Dartmouth College, Dick rowed crew and had a life-long love of golf and skiing. At Dartmouth, Dick met the love of his life, Helen Baker, while visiting Smith on his way to a rowing regatta. They married his senior year, and they held hands throughout life. Dick started flight training in the Air Force after college, ready to go off to the Korean War and leave his new bride. Dick gained his "wings" on the day that the war ended, and at the end of the runway for his first solo, he pledged his life to God. His faith was central to his life from that day on. Dick later transferred to the Air National Guard, and he and Helen made their home in Lancaster. Once there he joined his father, "Chet", in leadership roles at The Animal Trap Company of America where he spent over 35 years. The "Trappie," as it was called by many employees, grew under his direction and diversified into outdoor recreation products for boating, fishing, and skiing. The company was re-named Woodstream Corporation, and went public on the OTC exchange, followed by a listing on the American Exchange. Dick was a consummate salesman, successfully placing the company's products with some of the world's great retailers by flying in person to see them in the company's small plane. In the factory, he was loved by the manufacturing workers, and had no problem rolling up his sleeves and getting his starched white shirt dirty helping to repair a molding machine. Everyone knew that they could count on Dick if they had a sudden need. Dick served on the Board of the American Exchange and the Fulton Bank, as well as the boards of the Lancaster Country Day School and the Lancaster General Hospital. He was a member for many years at the Lancaster Country Club, Hamilton Club, Jupiter Island Club, and Hobe Sound Yacht Club as well as Pine Valley, Seminole, and Sankaty Head Golf Clubs. He served on the vestry of Saint James Episcopal Church in Lancaster, PA, and was an active volunteer at Christ Memorial Chapel in Hobe Sound, FL. Dick is survived by his beloved bride, Helen, and his four children: Richard G. Woolworth, Jr. (Greenwich, CT), Andrew B. Woolworth (Lancaster, PA), Sally W. Lynch (Greenwich, CT), and Louise W. Lamphere (New York City). His legacy continues in 13 grandchildren and 18 great-grandchildren who affectionately called him, "Boomie." In lieu of flowers, Dick's family asks that gifts in his memory be given to St. James Episcopal Church, Christ Memorial Chapel, or the Lancaster Country Day School.

Richard G. Woolworth, "Dick," passed away peacefully on Saturday, March 6, 2021 surrounded by many family members in Hobe Sound, Florida. Dick's gifts of hospitality, gratitude, and service to others changed the lives of family, friends, and... View Obituary & Service Information

The family of Richard G. Woolworth created this Life Tributes page to make it easy to share your memories.