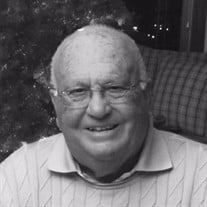 Robert J. Hershock, 86, a resident of Willow Valley, passed away on Thursday, August 13, 2020. He was born in Lancaster, the son of Lester and Bertha (Schmid) Hershock. Bob was a loving husband to his High School sweetheart, Patricia (Groff) Hershock, for 64 years. He was a real swell guy who always made Patsy laugh. Bob attended Bucknell University with Pat. He received excellent grades throughout his education, but only if the chart was read upside-down. Bob had a prestigious 38 year long career with the 3M Company, where he worked his way up from sales to Corporate Vice President of Marketing. He particularly enjoyed his role as Managing Director of 3M Switzerland, where he, Pat and Steve lived for several years. He cherished family trips to the shore, gatherings with friends at Mount Gretna, and his time spent hosting family on their historic farm he and Pat purchased in retirement. His final years were spent enjoying their home in Palm Coast, FL, where he spent most of his time skinny-dipping in the lanai pool. Bob spent his last days on the porch of his Mount Gretna home, surrounded by his wife and 3 children. In addition to his wife Pat, Bob is survived by his children, Kimberly Eddy of Boynton Beach, FL, Lynn Thompson of Mount Joy, PA, and Steven Hershock of Jackson, WY; his grandchildren, Henry, Sean, Shea, Allison, Andrew, Taryn, and Justin; and seven great-grandchildren. He was preceded in death by his son Bob Hershock, Jr. Private services will be held at the convenience of the family. Interment will be held at St. Stephen’s Reformed Church Cemetery, New Holland, PA. In lieu of flowers, memorial contributions in Robert’s name can be made to Lancaster Farmland Trust, 125 Lancaster Avenue, Strasburg, PA 17579. Cards may be sent to 396 Farmview Lane, Mount Joy, PA 17552.

Robert J. Hershock, 86, a resident of Willow Valley, passed away on Thursday, August 13, 2020. He was born in Lancaster, the son of Lester and Bertha (Schmid) Hershock. Bob was a loving husband to his High School sweetheart, Patricia (Groff)... View Obituary & Service Information

The family of Robert J. "Bob" Hershock created this Life Tributes page to make it easy to share your memories.

Robert J. Hershock, 86, a resident of Willow Valley, passed away...

Send flowers to the Hershock family.