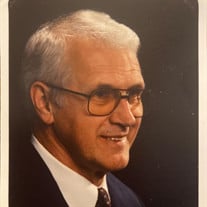 Robert E. Lehr, 86, passed away at home on Tuesday, April 20th 2021, surrounded by the love of his devoted family. Born in March 1935 in Millersville, he was the son of Milton E. Lehr and Florence Erisman Lehr. He was married to Mary Gochenaur Lehr for 61 years. He graduated from Millersville State Teachers’ college with a Bachelor’s degree and from Temple University with a Masters Degree in Education. From 1957-1959, Bob served in the U.S. Army stationed in Baumholder, Germany. A life-long educator, Bob’s career began as a sixth-grade teacher in Lancaster Township. He became a principal at Paradise Elementary school and at Price Elementary school in Lancaster PA, retiring after 40 years in education. As an educator, Bob strongly supported and employed an arts Infusion Program at Price, participated in DADD’s (Demonstrate against Drug Dealers), and served with Cadet and Camp Brairwood. Even as a young man, Bob started an Indian Lore Club for Millersville area boys, employing hands-on approach for learning about American Indian culture. Bob was active in his community organizations, such as, Millersville Historical Society; the Conestoga Area Historical Society, where he was a board member, docent, and exhibitor at the fall festivals; the Lancaster Woodcarvers Club where he served as a president and was a recipient of the John Herrington Award; the Millersville University Alumni Association, where he received the Outstanding Volunteer Service Award. Athletics also played a major role throughout Bob’s life. At Penn Manor High School, he participated in soccer, basketball, volleyball, baseball, and swimming. In 2008, he was inducted into the Penn Manor Athlete Wall of Honor. While at Millersville University, he played baseball and basketball. Later he enjoyed playing volleyball on a community or church team. An avid supporter of Millersville University basketball, Bob was especially proud of carving a 6-foot Marauder which stands in Jefferson Hall, MU’s Athletic Department. One of Bob’s passions was his love of his Morgan sports car. He was a member of the Philadelphia and D.C. car clubs, enjoyed participating in annual national Morgan meets and served as a judge at the 75th Anniversary of the Morgan Motor Company in England in 1984. Bob drove his Morgan to school where the students admired but knew not to touch. In his later years, a deep interest in history of piracy resulted in reading and collecting hundreds of related books and giving informative talks to organizations on the Golden Age of Piracy. His love of history also led to participating in Early American Rendezvous with his grandchildren introducing them to Native American Life. In addition to his wife, Bob is survived by his son, Scott Lehr (Lucie) and daughter, Kelly Gallagher (James), his grandchildren, Samuel Lehr, Madeline Lehr, Anne Gallagher, Leah Gallagher, step children, Shawn Gallagher, (Laura), Shannon Gallagher, Alexa Balwin, Geneva Balwin, his step great-grandchildren, Colin, Adam, Bridget, Zaius. Also surviving is a brother, Bruce Lehr (Betty Lou) and their family. A Memorial Service will be held on Saturday, May 1, 2021 at 11:00 a.m. at The Groffs Family Funeral Home, 528 W. Orange Street, Lancaster, PA 17603. Friends are welcome to greet the family starting at 10:00 a.m. at the funeral home. Interment will be private. In lieu of flowers, contributions can be made to St. Jude’s Children’s Hospital or Wounded Warriors. The family would like to thank Hospice and Palliative Care Compasses for its excellent care of Bob.

Robert E. Lehr, 86, passed away at home on Tuesday, April 20th 2021, surrounded by the love of his devoted family. Born in March 1935 in Millersville, he was the son of Milton E. Lehr and Florence Erisman Lehr. He was married to Mary Gochenaur... View Obituary & Service Information

The family of Robert E. Lehr created this Life Tributes page to make it easy to share your memories.

Send flowers to the Lehr family.