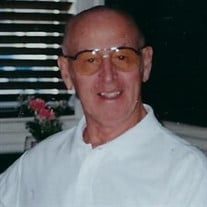 Robert C. “Rusty” Roschel, 93, died peacefully on Wednesday, December 16, 2020, at Pleasant View Retirement Community, Manheim, PA. Born in Lancaster, PA, he was the son of the late Frank and Bertha Grimm Roschel and was married for 68 years to Rosemary G. Roschel who died in 2018. He attended Lancaster Catholic High School for the sole reason of playing football and earning a varsity letter. He served our country in the U.S. Army, and upon his return to Lancaster, worked as a butcher for ACME Markets retiring after 40+ years of service. Rusty was a simple man, with his own brand of wisdom. He was a devoted son and husband, and a stern but proud and caring father, who instilled a sense of personal responsibility and strong work ethic into all three of his sons. He was always eager to hear about his grandchildren's accomplishments. Rusty cheered for his two favorite teams Notre Dame and the New York Jets. He and Rosemary loved going out to eat at local restaurants and dancing at numerous venues. He also loved hosting the Christmas family gathering where he will always be remembered for eating a mountain of Rosemary’s famous macaroni salad. Rusty is survived by three sons: Gregory R. Roschel, The Woodlands, TX, Scott R. (Karen) Roschel, and Sherwood W. (SandraLee) Gingrich, both of Lancaster; seven grandchildren and 14 great-grandchildren; and a sister-in-law, Helen (Gil) Knouff, East Petersburg. He was preceded in death by siblings: Ken and Frank Roschel, Jane Drybred, and Betty Gessner. A private service will be held at a later date. Memorial donations in Rusty’s name may be made to Hospice & Community Care, 685 Good Drive, Lancaster, PA 17604-4125.

The family of Robert C. Roschel created this Life Tributes page to make it easy to share your memories.

Send flowers to the Roschel family.