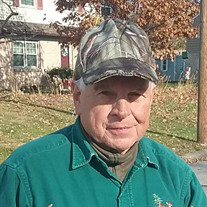 Robert L. Trout, 79, of East Petersburg, went home to be with the Lord with his family by his side on Thursday, August 20, 2020. Born in Providence Township, he was the son of the late Harry F. and Tracy Reedy Trout. Robert was a loving and devoted husband to Linda B. Trout for more than 57 years. Robert was a graduate at Solanco H.S. and worked for 30 years as a Lab Technician at Armstrong World Industries. In his retirement years, Robert worked for Manheim Auto Auction. He was a faithful and active member at Grace Church Lancaster attending for more than 30 years, serving as a Trustee and Head Usher as well as active in men’s prayer breakfast. Robert’s passion in his addition to his faith was hunting. There are four seasons that he adhered to spring gobbler, early deer, small game and turkey and rifle deer season. A true outdoorsman, he and the family spent years at C&C Camp in Cassville, PA and was a member of the Cassville Hunting Club and the NRA. His favorite food was southern fried pork cutlet with fresh cut french fries and venison and for dessert he loved his mother’s fresh baked fruit pies. He loved spending time with his family and grandchildren. In addition to his wife Linda, Robert is survived by his son Robert L. Trout Jr. (Christina) of Lancaster and daughter Bonnie L. Kost of East Petersburg. As one of seven siblings, his brother Harry (Janet) Trout, Fred (Deb) Trout and sister Nancy (Carl) Waltz survive him. He loved his grandchildren Faith and Kelsey so very much and all his nieces, nephews, and cousin. He was preceded in death by his brothers Raymond (Jimmy), William (Bill) and Earl (Pete). A PRIVATE Memorial Service for Robert will be held on Saturday, September 12, 2020 at 10am. The service will be livestreamed at gracelanc.org and on Facebook at Grace Church Lancaster PA. The interment will be held at Conestoga Memorial Park at the convenience of the family In lieu of flowers, please make a memorial contribution in Robert’s name to Camp Conquest, 480 Forest Rd., Denver PA 17517.

Robert L. Trout, 79, of East Petersburg, went home to be with the Lord with his family by his side on Thursday, August 20, 2020. Born in Providence Township, he was the son of the late Harry F. and Tracy Reedy Trout. Robert was a loving and... View Obituary & Service Information

The family of Robert L. Trout created this Life Tributes page to make it easy to share your memories.

Send flowers to the Trout family.