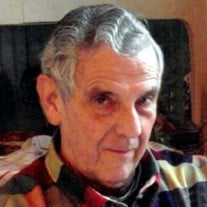 Roy Clare Clapper, 85, died peacefully on Saturday, July 11, 2020 at Magnolias of Lancaster. Born in Newburgh, NY, he was the son of Clare Wesley Clapper and Sarah Boyd Clapper. Roy was married to Mary Ann Clapper, who passed away this past March, for more than 60 years. They met at age 16 at a roller-skating rink and waited until they were 21 to be married, at the request of her parents. Roy graduated from Newburgh Free Academy in 1952 and then enlisted in the U.S. Air Force. Upon leaving the military Roy would embark on a fulfilling 34-year career with IBM as an electrical engineer. With his Air Force electronics training as a base, Roy continued to teach himself and rose to the position of Systems Engineer without further formal education. He worked on electronic warfare systems for military aircraft from the B-52 to the Joint Strike Fighter. An early practitioner of fiber optic technology, he was part of a team that installed fiber optics at the White House in the 1970s. The family home in Owego, NY was Roy’s true joy and the foundation of his family life. Roy himself designed this mid-century-modern ranch house on nine wooded acres, where he and Mary Ann raised their children and lived from the early 1960s to the 1990s. In devotion to Mary Ann, Roy planted many flowers around the property. Developing and tending this land was his main avocation. He created a large vegetable garden and planted an orchard with fruit trees and berry bushes. Roy also enjoyed variety of activities. He liked to backpack the Adirondacks, with his family and with a group of friends from work. Roy and Mary Ann had a deep Roman Catholic faith and attended church routinely with their children. He was also fond of playing poker, both in a neighborhood game and more frequently with his two sons. In later years his enjoyment of nature manifested itself in his grooming the grounds of the New Hampshire home where he and Mary Ann lived from 2007 to 2019 and watching the animals around the pond out the back windows. Roy is survived by his two sons; Michael Clapper (Amelia), Lancaster, Daniel Clapper (Monique), Burnt Hills, NY and five grandchildren: Henry, Agatha, Winston, Duncan, and Roman and his brother-in-law, Michael Masloski. Roy was the sole brother to his fours sisters: Dorothy, Linda, Martha and Jeanne.

Roy Clare Clapper, 85, died peacefully on Saturday, July 11, 2020 at Magnolias of Lancaster. Born in Newburgh, NY, he was the son of Clare Wesley Clapper and Sarah Boyd Clapper. Roy was married to Mary Ann Clapper, who passed away this past... View Obituary & Service Information

The family of Roy Clare Clapper created this Life Tributes page to make it easy to share your memories.

Send flowers to the Clapper family.