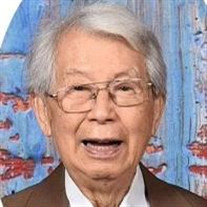 Samuel Kun-Kang Chen, 95, went home to be with the Lord very suddenly without suffering at home surrounded by family on Tuesday, December 14, 2021. Born in Yongxin County, Jiangxi Province, China, Samuel was married to Ruth Wen Hwa Chen for 54 years. After leaving China in 1949, he went to Taiwan and then came to the United States in 1953. He had 3 Master’s degrees and taught high school Music and Math. He later served as an analytical chemist for Rexall Drugs, and worked for 10 years as a pharmacist for the Veterans Administration. He also served as the music director at various churches in his life. Samuel and Ruth have lived in Lancaster and Taiwan for the last 10 years. In addition to his wife, Samuel is survived by a son, Daniel and Kitty Luo, Lancaster, PA and grandchildren: Josiah, Jakin, and Jason. A funeral service will be held at Chinese Bible Church of Lancaster, 4050 Marietta Avenue, Columbia, PA on Sunday, December 19, 2021 at 2:00 p.m. with Pastor Daniel Luo officiating. A viewing will be held from 1:30 p.m. until the time of service. Interment will be held at Millersville Mennonite Cemetery. Memorial contributions in Samuel’s name may be made to the Chinese Bible Church of Lancaster Mission Fund. CBCL, 4050 Marietta Avenue, Columbia, PA 17512 or www.CBCLPA.org

The family of Samuel Kun-Kang Chen created this Life Tributes page to make it easy to share your memories.

Send flowers to the Chen family.