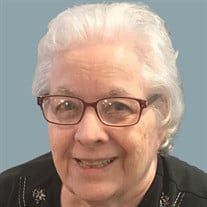 Sandra Ann Hickey, 77, of Lancaster, PA, passed away on Wednesday, November 4th, 2020 at Masonic Villages. She was the daughter of the late Francesco and Carmen Castano. She was married to her late husband Leon C. Hickey, who passed away in 2016, for 24 years. Sandy graduated from Lancaster Catholic High School. She went on to work as a Telephone Operator at Bell Telephone and later at Lancaster General Hospital. Sandy was a devout Catholic and attended St. Anthony’s Catholic Church for 25 years. She was artistic and enjoyed various mediums including painting, drawing, and coloring. She also sang in the choir at Sacred Heart Church. Animals held a special place in Sandy’s heart, especially her many pet dogs, cats, and her Cockatiel Henry. Sandy was a people-person, with a large circle of friends. She greatly enjoyed playing Rummy with them and going out to dinners. Her family fondly remembers her good cooking and her kind heart. She was always a helping hand to her neighbors and those around her. Sandy was a wonderful mother and was even called “mom” by her son's neighborhood friends as he grew up. Sandy is survived by her son, James L. Mays (Angela) of Millersville, PA, her sisters, Titina Heisler of Millersville, PA, Rose Macrina of Lancaster, PA, and Philomena McKinney of North Carolina, her brother, Gregory Castano (Lisa) of Lancaster, PA, her grandchildren: Jadan Mays, Xavier Mays, and William Minnick, and many nieces and nephews. In addition to her parents, Sandy is preceded in death by her beloved husband, Leon C. Hickey. A Memorial Service for Sandy will be held on Thursday, November 12th, 2020 at 2:00 p.m. with visitation beginning at 1:00 p.m. at The Groffs Family Funeral Home, 528 W. Orange Street, Lancaster PA 17603. A private family interment will be held at St. Joseph’s Catholic Cemetery. Memorial contributions may be made in Sandy’s name to Masonic Villages, 1 Masonic Dr, Elizabethtown, PA 17022. Her family would like to thank Masonic Villages for their fantastic care. **Sandy's Memorial Service is available to be viewed by Tribucast https://client.tribucast.com/tcid/94736753 **

Sandra Ann Hickey, 77, of Lancaster, PA, passed away on Wednesday, November 4th, 2020 at Masonic Villages. She was the daughter of the late Francesco and Carmen Castano. She was married to her late husband Leon C. Hickey, who passed away in... View Obituary & Service Information

The family of Sandra Ann Hickey created this Life Tributes page to make it easy to share your memories.

Sandra Ann Hickey, 77, of Lancaster, PA, passed away on Wednesday,...

Send flowers to the Hickey family.