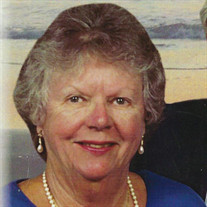 Sara Jane "Sally" Lutz, of Willow Street, PA., formerly of Leola, PA, passed peacefully into God's hands at her residence on Tuesday, March 9, 2021, following an extended illness. In her 93rd year, her earthly life ended surrounded by loving friends and family, for which we are so grateful. Born and happily raised in Elizabethtown, PA, she was the daughter of the late Frank and Erma Gross Breneman. Sara graduated from Elizabethtown High School, even becoming Homecoming and May Queen in her senior year! She attended Elizabethtown College. In Sally's younger years, she rose to become an accomplished pianist and organist and was accepted to New York City's Julliard School of Music. She won awards as an equestrian, a skater, the highest achievement rank in the Girl Scouts of America, and was a champion backstroke swimmer. Sally would often endearingly remark that her strength came from "good Jewish genes"! In fact, her grandfather, Dr. Reuben Gross, came to be the oldest veterinarian in America, still in practice while in his 90's! Sara (along with her daughter) founded "The Steph 'n Sara's Homestead Shoppe,” a country shoppe featuring wreaths, florals, and antiques. The store was originally located in Strasburg and then moved to Willow Street. Sara worked into her 90’s as well at the shoppe. Her most treasured position in life, however, was being a wife, mother, and homemaker. She became the wife of her beloved late husband, H. Donald Lutz, on New Year's Day, 1949. Don preceded her in passing to Heaven on July 17, 2012. Having been married for 64 devoted years, Sally endured emotional grief which stemmed from the loss of her husband. Throughout their marriage, Sally and Don enjoyed countless fun times while traveling throughout the United States in their motor home, and trips to their home in Sea Isle City, New Jersey. They loved to go antiquing, and acquired an extensive collection of quilts, artwork, and Lutz glassware. Together, they cherished God, their family, and each other, leaving a lasting legacy of commitment and love. She is survived by two children, Stephanie A., wife of Kimmel Schaefer of Willow Street, her son-in-law whom Sally loved dearly, and John R. Lutz of Leola, PA, six grandchildren: Carlie, Jimmy (Cyndi), Farryn, Ashley (Dustin), Tobyn, Jacob (Amelia), and Anthony; and five great-grandchildren: Madison, Makayla, Jake, Elliette, and Grant. She was preceded in death by her brother, John Robert Breneman. Sally lived a rich and long life, and in her later years, many wonderful people joined together in sharing joy and comfort with her. In appreciation of their devoted friendship and personal care, her family would like to thank the following: The WONDERFUL nurses, aides, and chaplain with Kindred Hospice, Dr. Kristen Nebel, The Lititz Senior Day Center, The Worship Center's Widow's Group, Sisterhood from Seed of Abraham, the Leola Methodist's congregation, Landis Homes Dementia Caretaker's Group, Jewish Family Services, Rabbi and Marlene Rosenberg from Beth Zion Messianic Congregation, Com-4-Care of Lancaster, Jessica Cartwright, Michele DeRosa from Groff's, Sharon Charles from Abundant Living Ministries, so many caring folks from the East Lampeter Township community, and our precious grandchildren who did so much in loving and caring for her. Relatives and friends are invited to attend Sara Jane's Funeral Service at The Groffs Family Funeral Home, 528 West Orange Street (corner of W. Orange & Pine Sts.) Lancaster, PA on Tuesday, March 16, 2021, at 11:00 a.m. with Hospice Chaplain Fred Poorbaugh officiating. This will be a closed casket service. Interment will follow at Mt. Tunnel Cemetery in Elizabethtown, PA. Memorial contributions may be sent to Kindred Hospice, 1891 Santa Barbara Drive, Suite 201, Lancaster, PA 17601.

The family of Sara Jane "Sally" Lutz created this Life Tributes page to make it easy to share your memories.

Send flowers to the Lutz family.