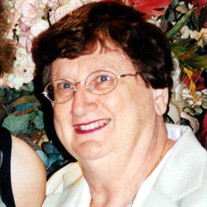 Shirley Ann John, 84, formerly of Beechwood Road, Lancaster, PA, passed away on Sunday, February 21, 2021 at Brethren Village, Lititz, PA. Born in Ephrata, she was the daughter of the late Edwin G. and Edna M. Cooper Griffith. She is lovingly survived by her daughter, Michelle John, Portland, OR and her sister, Betty McCarty, Lititz, PA. She was preceded in death by her sister, Fay Lorraine Levy and two brothers, Elmer and Ronald. Shirley was a member of St. Thomas Episcopal Church where previously she was a member of the Vestry and Mission and Outreach Committee. Shirley graduated from Ephrata High School in 1954. She received a Bachelor’s Degree in Christian Education from King’s College, Briarcliff Manor, New York in 1959. Shirley earned a Master’s Degree in Counselor Education from the University of Maryland in 1969. She received certification as a school psychologist from Millersville University in 1973. Shirley worked as a guidance counselor at Manheim Central Jr. High School from 1969 – 1996. She worked as a psychologist after retiring from Manheim Central. Her friends appreciated her listening and counseling as well. In her earlier years, she was a schoolteacher. She taught in a one-room school in Lancaster County in 1959-1960. She taught at the elementary and high school levels in Maryland. Throughout her life, Shirley valued Faith, education, family and friends. She shared her home with her sister, Fay for many years. She maintained friendships from her Ephrata youth, her college years, neighborhood, church and Manheim years. She loved those Olive Garden meals with the Manheim girls. Even in her later years, she consulted a well-worn index card to remind her to send a birthday card to friends. Shirley appreciated her frequent phone calls with her sister, Betty, and several dear friends. These were sustaining for her. Private services will be held at the convenience of the family. At a later date, Shirley will be interred at The Memorial Garden of St. Thomas’ Episcopal Church. In lieu of flowers, memorial contributions may be sent to St. Thomas Episcopal Church, 301 St. Thomas Road, Lancaster, PA 17601 or Brethren Village Good Samaritan Fund, 3001 Lititz Pike, Lititz, PA 17543.

Shirley Ann John, 84, formerly of Beechwood Road, Lancaster, PA, passed away on Sunday, February 21, 2021 at Brethren Village, Lititz, PA. Born in Ephrata, she was the daughter of the late Edwin G. and Edna M. Cooper Griffith. She is lovingly... View Obituary & Service Information

The family of Shirley Ann John created this Life Tributes page to make it easy to share your memories.

Send flowers to the John family.