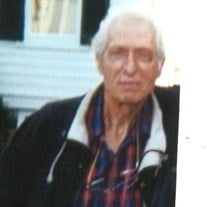 Stanley Lichtenstadt, of Lancaster, PA, died at the Lebanon VA Medical Center Hospital on Thursday, January 14, 2021 of metastatic prostate cancer that was only discovered the month before. This is important. Current medical thinking is that old men do not need to be tested or monitored for prostate cancer because “men die with it, not of it.” In Stanley’s case, this was not true. A metastasis caused a hip fracture that could only be fixed by surgery. But when you are a 93-year-old with heart failure and kidney problems, no one is going to operate on you. Stanley had no problem betting on, say, a 30/1 shot in the 9th at Aqueduct, so it wasn’t surprising he wanted to take the risk. It was his only chance. But although the hospitalist on duty spent 40 minutes trying, he couldn’t convince a surgeon off-site to do the surgery. Thus the plan became “comfort care,” which in Stanley’s case meant being unable to walk and requiring such strong pain killers that he couldn’t say goodbye to his loved ones (a problem made worse by Zoom only contact -- Zoom may have made many things in life doable during the pandemic, but death isn’t one of them). Mercifully, he didn’t last long. Stanley’s other health problems were progressing slowly enough that it would have been worth catching the prostate cancer years earlier. Yet despite exemplary care at the VA Medical Centers in both Washington, D.C. and then in Lebanon, including constant surveillance of bladder/kidney issues, prostate cancer was never considered. Men die with it not of it. Finally, a strange lab result made Stanley’s wonderful geriatric doctor break the rules and do a PSA test. It was 409. A scan a few weeks later showed metastases in about 6 places. One awful irony: Stanley had always saved newspaper clippings, marked with a date and some comment and put in some arbitrary collection in those cardboard envelopes from the Post Office. He went into the hospital the evening of the 28th but somehow must have gotten a newspaper from the 29th. That was the date of a syndicated Dr. Oz column discussing prostate cancer. Stanley had written on it “Wed A.M. Dr said I have it in my bones,” and at the bottom, “I talked to Dr” and the doctor’s name. His friends only know this because when his belongings were returned, there was the little green pouch Stanley always wore around his neck when he went to the V.A. As usual there was his ID card and an extra $20. But in the pouch this last time there was also that clipping. So if Stanley’s death is going to mean anything, his friends would like to encourage any man over 75 not to listen to the conventional wisdom. Men DO die of it, even old ones. Get yourself checked for prostate cancer, if not every year then at least at some regular interval. Stanley was born to Polish immigrants on August 11, 1927 and grew up in Williamsburg, Brooklyn. He served in the Coast Guard in Louisiana and in the Army in Korea. He spent some time in Japan before returning home to New York, where he worked as a stockbroker as well as in administrative positions for both the New York Police Department and New York City Off-Track Betting. Stanley read everything and traveled to as many places as he could, accompanying his wife back to her native Scotland, from which they explored most of Europe. In his later years, Stanley lived in Washington, D.C. and then Lancaster. And while he might have said he landed there by default, there were things he loved: the now-closed Penn National OTW; the Park City Diner and Fiorentino’s at the Airport, (especially on Wednesday nights for the 5$ pasta special). Still, his favorite spot in the world was probably the 12 or so mile strip in New Jersey from Spring Lake to Long Branch. Stanley was predeceased by his wife, Helen Malone of Glasgow, Scotland. His survivors include his goddaughter, Debbie Malone, many nieces and nephews, his buddy, Frank Thomson, and the friend he had for almost half of his lifetime and more than half of hers, Susan Lord. Donations in Stanley’s memory may be made to Fisher House Foundation or Congregation Degel Israel in Lancaster.

Stanley Lichtenstadt, of Lancaster, PA, died at the Lebanon VA Medical Center Hospital on Thursday, January 14, 2021 of metastatic prostate cancer that was only discovered the month before. This is important. Current medical thinking is that... View Obituary & Service Information

The family of Stanley Lichtenstadt created this Life Tributes page to make it easy to share your memories.

Stanley Lichtenstadt, of Lancaster, PA, died at the Lebanon VA...

Send flowers to the Lichtenstadt family.