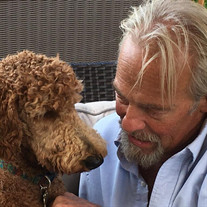 Steele “Rob” Roberts Sellers II, 70, who resided in the “Honner House” in Willow Street, PA, passed away on Tuesday, March 2, 2021. Born in Detroit, Michigan, he was the son of the late Steele Lamb Sellers and Jeannie L. Lomedieu Sellers Taylor. After attending Franklin & Marshall College, Rob worked for over 40 years in the construction industry, beginning his career at CH&E Construction. Earlier in life, Rob was a co-owner at the Orange Street Tea Shop and held various positions in the restaurant industry. Rob was an avid hockey and football fan. He followed his home teams, the Detroit Red Wings and the Detroit Lions. During his free time, Rob loved to cook and was famous for his Eggs Benedict. He was often found in his garage working on his beloved Austin Healy Bugeye Sprite with his dear friend, Henry Welch. He was an avid reader and he and Deb enjoyed watching more television series and movies than necessary. Above all, Rob loved his four-legged children, past and present. He is survived by his loving wife, Deborah Sellers, his sister, Claire Brown (Wesley) of Greenville, SC, his brother Charles Sellers (Gayle) of Washougal, WA, along with numerous loved cousins, nieces, and nephews. Rob was an extraordinary person and all who crossed his path hold a special place in their heart for him. Funeral Services will be private. Contributions to your favorite charity may be made in Rob’s name.

The family of Steele "Rob" Roberts Sellers II created this Life Tributes page to make it easy to share your memories.