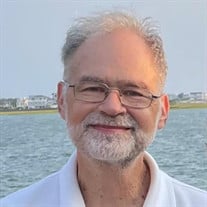 Steven F. Killough died on November 12, 2021 from injuries sustained after being struck by a vehicle while walking in downtown Lancaster, leaving us far too soon. Steve was a man of incredible kindness, wisdom, wit, intellect, empathy, and humility. Born in Shirley, MA on September 16, 1955, Steve grew up in Chestnut Hill, PA. He spent his youth demonstrating natural engineering skills by inventing items, such as the two-way light switch. As an 8 year old, while initially disappointed to learn he wasn’t the first to discover such things, his creative spirit and intellectual curiosity were not deterred. He was fascinated by how things work and spent his childhood disassembling and reassembling devices to understand the mechanics. He developed his love of music at a young age and began his pursuits of rock stardom. His greatest joy was found in 9th grade, when he attended a dance at Chestnut Hill Academy where he graduated high school. It was there that he met his best friend and love, Nan Strong. Their story would be written for the next 52 years. He went on to graduate from Brown University with dreams of becoming a doctor. Following college, Steve and Nan found their way back to each other and were married in 1982. Steve graduated from Hahnemann Medical School where he completed his residency in Pediatrics. They welcomed their first child Emily during medical school. They began their adventure in Lancaster when Steve accepted the offer to join Lancaster Pediatric Associates, where he practiced for over 30 years and served as a partner. Andrew joined the family after they moved and their family was complete. Nan and Steve provided their children with a wonderful education, love, support, and experiences. Steve lived his values and was committed to a life of service. He was a constant in his children’s lives and was eager to assist them in their pursuits and graced them with unending wisdom and patience. An excellent and respected physician, Steve cared for generations of children in Lancaster County over his 3 decades career. He applied his building/carpentry skills to help others as he joined many mission trips with St. James’ Episcopal Church. He was able to fix just about anything and loved being the unofficial handyman at Lancaster Pediatrics. After putting off his music career to become a doctor, he picked it up again when his kids had left the house and dreamed of being a rock and roll star. He spent his free time perfecting his guitar and ukulele skills, playing in Ukulele Uprising, running sound at St. James, and following the Lancaster music scene. Steve was never without his harmonica and ready to join any band that welcomed his participation. Steve was loved and is greatly missed by his family. He is survived by his wife of 39 years, Nan, daughter Emily Killough Sparks (Aaron) of Durham, NC, son Andrew Killough of Portland, OR, mother Christine Killough of Chestnut Hill, PA, sister Elizabeth Killough of Glenside, PA, father Robert Killough of Charlotte, NC, and grandchildren Anne and Molly Sparks. His love, patience, humility, and compassion exceed the limits of any normal human. We hope that there is a harmonica and glass of scotch waiting for you. Steve, you are an unwavering band of light and in the words of his grandchild Annie, “he was really awesome.” A Requiem Funeral will be held at St. James Episcopal Church, 119 N, Duke Street, Lancaster, PA on Saturday, November 20, 2021 at 11:30 a.m. with The Reverend David W. Peck officiating. The family will receive friends at the church from 10:30 a.m. until the time of service. (Masks are required) In lieu of flowers, we invite you to consider a gift to Music for Everyone, St. James Episcopal Church or Lancaster Cleft Palate Clinic in his memory.

Steven F. Killough died on November 12, 2021 from injuries sustained after being struck by a vehicle while walking in downtown Lancaster, leaving us far too soon. Steve was a man of incredible kindness, wisdom, wit, intellect, empathy, and humility.... View Obituary & Service Information

The family of Steven F. Killough created this Life Tributes page to make it easy to share your memories.

Send flowers to the Killough family.