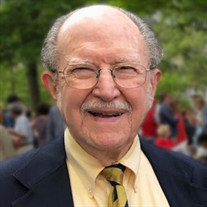 Dr. Thomas Johns (“Tom”) Hopkins, 90, of Lancaster, PA, passed away on Saturday, February 20, 2021 at Homestead Village in Lancaster where he had resided since 2006. He was born in Champaign, IL, and was the son of the late Sewell H. and Pauline (Cole) Hopkins. He is survived by his wife of 64 years, Frances L. (Skinner) Hopkins; his children, Katherine M. Hopkins, Nicholas J. Hopkins (Anne), and Patrick S. Hopkins (Amy) all of Lancaster; his grandchildren, Jennifer Biryukov (Sergei), Sarah Perkins Hopkins (Cody), Christopher Hopkins, Duncan Hopkins, and Mia Hopkins; his great-grandchildren, Nikolai, Sofia, Ariana, Anna, and Henry; his brother, Nicholas A. Hopkins. Preceding him in death was his daughter, Susan L. Hopkins. Tom graduated from Stephen F. Austin High School in Bryan, TX, in 1948. He received a Bachelor of Science degree in physics from The College of William and Mary and a Bachelor of Science degree in mechanical engineering from Massachusetts Institute of Technology, both in 1953. He received a Bachelor of Divinity degree from Yale Divinity School in 1958, and a Doctor of Philosophy degree in comparative religions from Yale University in 1962. He taught Asian religions at Franklin and Marshall College, beginning in 1961, and he served as chairman of the Religious Studies department from 1973-1988 and 1990-1994. He retired from the position of Professor of Religious Studies in 1996. From 1998-1999, Tom served as Academic Director of the Oxford Centre for Hindu Studies (OHCS) in Oxford, England, where he tutored and lectured graduate students on Hinduism. From 1999 until his passing, he remained a Senior Fellow at OHCS. He was also an active member of the American Academy of Religion (AAR), from its inception in 1963 and throughout his career. Tom’s publications included The Hindu Religious Tradition (textbook), which is still used today in many college and university religion and theology classrooms. Prior to the decline in his health, he worked for many years researching and writing a second edition of this book - a significant expansion and update, which is pending publication. He also wrote various articles, book chapters, and encyclopedia entries on Hinduism and Indian religious history, including a chapter entitled "The Social Teaching of the Bhāgavata Purāṇa," which was published in a landmark publication in its time, Krishna: Myths, Rites, and Attitudes. His unpublished doctoral dissertation is entitled The Vaishnava Bhakti Movement in the Bhāgavata Purāṇa. Private memorial services will be at the convenience of the family. Contributions in his name can be made to Reading is Fundamental (www.rif.org) or Doctors Without Borders (www.msf.org).

The family of Dr. Thomas Johns Hopkins created this Life Tributes page to make it easy to share your memories.